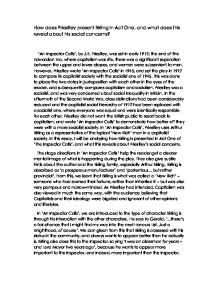 How does Priestley present Birling in Act One, and what does this reveal about his social concerns?

How does Priestley present Birling in Act One, and what does this reveal about his social concerns? 'An Inspector Calls', by J.B. Priestley, was set in early 1912; the end of the Edwardian Era, where capitalism was rife, there was a significant separation between the upper and lower classes, and women were subservient to men. However, Priestley wrote 'An Inspector Calls' in 1945, and set the play in 1912 to compare its capitalist society with the socialist one of 1945. This was done to place the two dates in juxtaposition with each other in the eyes of the reader, and subsequently compares capitalism and socialism. Priestley was a socialist, and was very concerned about social inequality in Britain. ...read more.

They also give subtle hints about the author and the Birling family, especially Arthur Birling. Birling is described as 'a prosperous manufacturer' and 'portentous... but rather provincial'. From this, we learn that Birling is what was called a 'New Rich' - someone who had earned their fortune, rather than inherited it - but was also very pompous and narrow-minded. As Priestley had intended, Capitalism was also viewed in much the same way, with the audience believing that Capitalists and their ideology were bigoted and ignorant of other opinions and lifestyles. In 'An Inspector Calls', we are introduced to the type of character Birling is through his interaction with the other characters. He says to Gerald, '...there's a fair chance that I might find my way into the next Honours List. ...read more.

Priestley uses dramatic irony to fuel the audience's notions not only about Birling being very ignorant and rather simple, but also their notions about capitalism in general, as Birling is the representative of capitalism in 'The Inspector Calls'. Birling comments on the threat of war from Germany, saying nonchalantly, 'the Germans don't want war'. However, we as an audience - and especially the audience of 1946, rebuilding their lives in the aftermath of World War Two - know this to be false. Priestley uses this as a way of making the Socialist society of 1945 seem much better than the Capitalist one of 1912. In 'An Inspector Calls', Priestley uses Birling in a number of ways to reveal his attitudes towards Capitalism, and how he prefers the Socialist society of 1945. Priestley uses the Inspector to force the Birling's to take responsibility for their parts in Eva's death. ...read more.