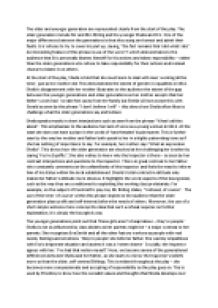 How does Priestley present the different generations in &quot;An Inspector Calls&quot;?

Transfer-Encoding: chunked ﻿The older and younger generation are represented clearly from the start of the play. The older generation include Mr and Mrs Birling and the younger Sheila and Eric. One of the major differences between the generations is that the young are honest and admit their faults. Eric refuses to try to cover his part up, saying, "the fact remains that I did what I did.". An interesting feature of this phrase is use of the word ?I? which demonstrates to the audience that Eric personally blames himself for his actions and takes responsibility ? rather than the older generations who refuse to take responsibility for their actions and instead choose to blame it on others. At the start of the play, Sheila is told that she must learn to deal with men ?working all the time?, just as her mother did. This demonstrates the extent of gender in equalities in 1912. Sheila?s disagreement with her mother illustrates to the audience the extent of the gap between the younger generations and older generations as her mother accepts that her father?s work had to take him away from the family but Sheila will not ...read more.

Sheila?s total contrast in attitude only makes her father?s attitude more obvious. It highlights the worst aspects of the bourgeoisie, such as the way they are conditioned to exploiting the working class proletariats. For example, on the subject of Eva Smith?s pay rise, Mr Birling states, ?I refused, of course?. The use of the term ?of course? within this phrase implies to the audience that the older generation place profit and self-interest before the needs of others. Moreover, the use of a short simple sentence here conveys the idea that such a refusal requires no further explanation; it is simply the bourgeois way. The younger generations point out that ?these girls aren?t cheap labour ? they?re people.? Sheila is not as influenced by class divides as her parents might be ? a major contrast to her parents. She recognises Eva Smith and all the other factory workers as people with real needs, feelings and emotions. ?they?re people? she tells her father. She warmly empathises with Eva?s desperate situation and asserts it was a ?rotten shame.? Crucially, the Inspector agrees with her: ?I?ve had that notion myself.? Here, we become aware of the generational differences between Sheila and her father, as she starts to mirror the Inspector?s beliefs more so than the older, self-centred Birlings. ...read more.

This again shows how the younger generations challenge the expectations of their social class ? highlighting the generational gap. The play is set before World War 1, in 1912. This period was drastically different to the one in which it was written, 1946, with the social classes being much farther apart. Sheila is shown as sarcastic and playful when she says ?(with mock aggressiveness) Go on Gerald- just you object!? This sentence implies that Sheila likes to joke around with Gerald, which was actually in contrast to how women were supposed to act in that period, showing early on that she is also quite rebellious and behaves in a way that is different to what is expected of her social class. To conclude, the generational gap helps highlight to the audience how naive and foolish the older generations are. Priestley also shows how we can all change, through the characters of Eric and Sheila who learn to become socially responsible. He creates the characters of Mr and Mrs Birling to seem foolish and out of touch. The children and parents hold drastically different viewports on social responsibility by the end of the play. ...read more.