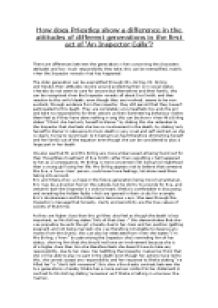 How does Priestley show a difference in attitudes of different generations in the first act of An Inspector Call?

﻿How does Priestley show a difference in the attitudes of different generations in the first act of ?An Inspector Calls?? There are differences between the generations when concerning the characters attitudes and how much responsibility they take, this can be exemplified, mainly when the Inspector reveals what has happened. The older generation can be exemplified through Mrs. Birling, Mr. Birling and Gerald, their attitudes revolve around protecting their own social status whereby do not seem to care for anyone but themselves and their family, this can be recognised when the Inspector reveals all about Eva Smith, and their reaction to this awful death, even though they are involved, seems to be non-existent, through evidence from the inspector, they still persist that they haven't participated to this death. ...read more.

Mr Birling is more concerned with losing his knighthood than a young girl losing her life. Mrs Birling appears not to believe that someone like Eva, a 'lower class' person, could even have feelings, let alone need them taking into account. Eric and Sheila show us hope in the future generation being more humanitarian. Eric may be a drunken fool on the outside, but he did try to provide for Eva, and certainly took the Inspector's words to heart. Sheila is comfortable in discussing and revealing the hidden faults which are ignored in their circle; for example Eric's drunkenness and the Alderman's lascivious ways. She sees through the Inspector's message that honesty, clarity and sensitivity are the true values of society of that time. As they are higher class than this girl they also feel as though the death is less important, as Mrs Birling states ...read more.

Overall I feel that Priestley shows the difference in the attitudes of different generations by portraying the elder two as being more concerned about the damage to their reputation that the case of Eva Smith might do, whereas the younger generation are more concerned with Eva Smith herself and if their link to Eva may have caused her death. The way that Priestley makes this difference in attitudes between the generations shows that reputation and status is becoming less important as the class divide becomes smaller. The younger generations seem to feel more guilty and sympathetic towards Eva Smith?s death. In conclusion it is clear that Priestley has shown the difference in attitude between the different generations by showing their feelings towards their possible role in the death of Eva Smith Alex Schroeter ...read more.