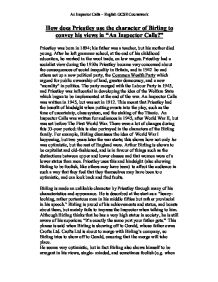 How does Priestley use the character of Birling to convey his views in &quot;An Inspector Calls?&quot;

How does Priestley use the character of Birling to convey his views in "An Inspector Calls?" Priestley was born in 1894; his father was a teacher, but his mother died young. After he left grammar school, at the end of his childhood education, he worked in the wool trade, on low wages. Priestley had a socialist view during the 1930s Priestley became very concerned about the consequences of social inequality in Britain, and in 1942 he and others set up a new political party, the Common Wealth Party which argued for public ownership of land, greater democracy, and a new "morality" in politics. The party merged with the Labour Party in 1945, and Priestley was influential in developing the idea of the Welfare State which began to be implemented at the end of the war. An Inspector Calls was written in 1945, but was set in 1912. This meant that Priestley had the benefit of hindsight when putting events into the play, such as the time of uncertainty, class system, and the sinking of the Titanic. An Inspector Calls was written for audiences in 1945, after World War II, but was set before The First World War. ...read more.

Birling is shown as hypocritical through some of the words he speaks: "You're the one I blame for this" (Birling speaking to Eric (Eric is seen as an embarrassment to Birling)). "The fact is you allowed yourself to be bluffed - yes, bluffed." (Birling speaking to his family). This is partly to connected to the fact that he cannot admit he was in the wrong. He is trying to use all his family (especially Eric and Sheila) as scapegoats, blaming them for what has happened. These characteristics all contribute to him becoming unlikable with the audience. They see him to be a stubborn, ignorant old-fashioned man who doesn't listen to other people's views, and a lot of the time uses other people as scapegoats. Birling's characteristics that make him unlikeable are backed-up by the views of other characters in the play. Sheila, for example, knows how ignorant and old-fashioned her father is, however she comes to terms with it. Sheila says "But these girls aren't cheap labour - they're people" which gives the impression that she has matured during the course of the play. ...read more.

It is a cliff-hanger, and makes the audience think about the play. It enables them to talk about the play after it finishes, asking questions such as "Was the inspector real?" or "Who was the inspector?". This means it stays in their memory much longer than if the end was quick and expected (a break from "and they all lived happily ever after") Priestley uses Birling as his antithesis: Priestley's views are mirrored by Birling's comments. He uses this to put his message across to the audience. The Inspector is also used to put Priestley's messages across, but as a mouthpiece. The Inspector has the highest authority in the play, out of all the characters. His last few words are "We are responsible for each other. If men will not learn that lesson, they will be taught it in fire and blood and anguish". This is a warning that if they do not pay attention to what he has taught them, they will be punished. This is also Priestley's view: if the world does not learn from past experiences, such as war, then the world will learn in great pain (i.e. the hard way). ?? ?? ?? ?? An Inspector Calls - English GCSE Coursework ...read more.