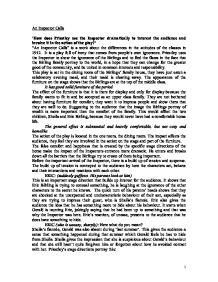 'How does Priestley use the Inspector dramatically to interest the audience and involve it in the action of the play?'

An Inspector Calls 'How does Priestley use the Inspector dramatically to interest the audience and involve it in the action of the play?' "An Inspector Calls" is a work about the differences in the attitudes of the classes in 1912. It is a play full of irony that comes from people's own ignorance. Priestley uses the Inspector to show the ignorance of the Birlings and to find the flaws in the face that the Birling family portray to the world, in a hope that they can change for the greater good of the community, and be united in common interests and responsibility. This play is set in the dining room of the Birlings' family house, they have just eaten a celebratory evening meal, and their maid is clearing away. The appearance of the furniture on the stage shows that the Birlings are at the top of the middle class. It has good solid furniture of the period The effect of the furniture is that it is there for display and only for display because the family wants to fit in and be accepted as an upper class family. They are not bothered about having furniture for comfort, they want it to impress people and show them that they are well to do. Suggesting to the audience that the image the Birlings portray of wealth is more important then the comfort of the family. This would affect the two children, Sheila and Eric Birling, because they would never have had a comfortable home life. The general effect is substantial and heavily comfortable, but not cosy and homelike The action of the play is located in the one room, the dining room. The impact affects the audience, they feel they are involved in the action on the stage and part of the furniture. The false comfort and happiness that is created by the specific stage directions of the home make the impact of the Inspectors entrance more dramatic. ...read more.

The directions for the Inspector to stare at each character is a fantastic dramatic device, showing his power over them all, the silence while he looks from one to the other gives time for them and the audience to reflect on what they have heard. By putting their new found knowledge into practice and learning from their terrible mistake in their treatment of Eva Smith, which caused her death the Birlings would learn the message that small actions can have big consequences. Another message that the Inspector brings is that everyone is equal, because we have co-inhabitants that live on the earth, the human race is one body and we all have as much right to be alive as every one else. The message is emphasised by its structure of short sentence and the repetition of the word 'we'. INSPECTOR: ...We don't live alone. We are members of one body. We are responsible for each other. The Inspector also gives a for-warning of the First World War, implying that it broke out because they did not have a sense of community and fellow men had not learnt the lesson that 'We are all members of one body'. War was their punishment. INSPECTOR: ...And I tell you that the time will come soon when, if men will not learn that lesson, they will be taught it in fire and blood and anguish. One of the final messages in the play is that if people don't look after their workers, the lower classes then this may result in mutiny and political back fire. INSPECTOR: One Eva Smith has gone- but millions and millions and millions of Eva Smiths and John Smiths are still left with us This is linked with Birlings's speech that 'community was nonsense' and with the idea that he thought the minors strikes were over, but they were not, the labour troubles that he put down to 'wild talk' were nothing of the sort. ...read more.

Now take it from me I never saw a photograph..... No matter how they tried to not implicate themselves it still had happened though, the audience knows this and can see them returning back to their old ways. It may not have been the same girl or the same photograph but these minor actions can still have big consequences. There is another build up of tension when Gerald is phoning the Infirmary. It is nervous tension, because they are waiting to hear if a girl had really died. This is a huge contrast to the relief they feel after Gerald has put down the telephone receiver. GERALD: ...No girl has died in there today. Nobody's been brought in after drinking disinfectant. The relaxed atmosphere emphasises and builds up for a new fear they will feel, bringing greater impact to the phone call. The telephone rings sharply. There is a moment of complete silence BIRLING: hat was the police. A girl has just died - on her way to the Infirmary- after swallowing some disinfectant. And a police inspector is on his way here- to ask some questions. As they stare guiltily and dumbfounded the curtain falls Tension is built up in the moment of silence and by the relaxed atmosphere of the family who went expecting any more trouble, increasing the impact the phone call had on the family, carrying the suspense all the way through right until the end of the play. As the play draws to a conclusion the play leaves the audience feeling in a state of suspense and shock. Wondering and guessing what is going to happen. They may be thinking about, was the first Inspector preparing them for this? Was he trying to help them? Will they have to go through it all again? Have they learnt their lesson? What will the consequences be? Each audience member would have interpreted the play differently and will have been left with their own personal view and moral interpretation from the messages the Inspector brought the Birlings. This is why 'An Inspector Calls' works well as a play. 1 1 ...read more.