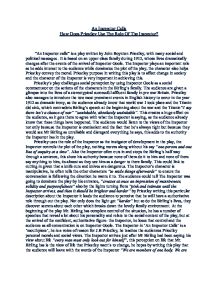 How Does Priestley Use The Role Of The Inspector?

An Inspector Calls How Does Priestley Use The Role Of The Inspector? "An Inspector calls" is a play written by John Boynton Priestley, with many social and political messages . It is based on an upper class family during 1912, whose lives dramatically changes after the events of the arrival of Inspector Goole. The Inspector plays an important role as he adds interest to the audience while dominates the plot of the play, the character also helps Priestley convey the moral. Priestley purpose in writing this play is to affect change in society and the character of the Inspector is very important in achieving this. Priestley's play challenges social perception by using Inspector Goole as a social commentator on the actions of the characters in the Birling's family. The audience are given a glimpse into the lives of a stereotypical successful affluent family in pre war Britain. Priestley also manages to introduce the two most prominent events in English history to occur in the year 1912 as dramatic irony, as the audience already know that world war I took place and the Titanic did sink, which contradicts Birling's speech at the beginning about the war and the Titanic "I say there isn't a chance of war" "unsinkable, absolutely unsinkable". ...read more.

Priestley uses the Inspector to represent the play and the realism of the situation, in the same way as when the Birling's found out that the Inspector was a hoax and both Mr & Mrs Birling said "This makes a difference, y'know. In fact, it makes all the difference" could be the same reaction the audience in the theatre could have on the play. The audience could go home thinking about the play not being real so not caring about the message about social change that Priestley was trying to get across or they could go home a have learnt a lesson. Priestley's main moral was; Society needs to change, we need to do thing as a whole not just for individual needs. Priestley uses the Inspector to put the audience in the same circumstances as the other characters, he acts shocked and disgusted when he gets each character to confess, this would make the audience feel the same way about themselves if they had committed these same actions. The reason the audience would feel this way is because Priestley created the Inspector to be persuasive, by making him omniscient the audience would take concern in what he was saying. ...read more.

The Inspector could also be the voice of 'the characters' - the audiences conscience as he make both of them think about there actions through out life, Priestley could have used this to make the change he wants to. Personally I think the character Inspector Goole was just put in the play to tell Priestley's moral, the character was a staging device like lights or backdrops. I think the Inspector was just a prop that helped state the point that at any moment in life your actions could come back to haunt you, so always look out for others as if you was one-body not a million. An Inspector Calls written by J.B Priestley in 1945 set in 1912, is about a successful upper class family, Priestley used this family to criticize the class system and he used an 'inspector' as his voice. The play is about responsibility for each over as a community, not just for ourselves as individuals. Priestley's main concern with society at the time was social inequality in Britain and he used an mysterious Inspector to play on the conscience's of his characters into confessions, and hoped that the audience will feel the same way about there wrong actions, he hope that he will change society. Priestley's main concern with society at the time was social inequality in Britain ...read more.