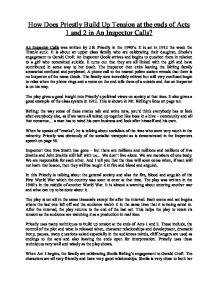 How Does Priestly Build Up Tension at the ends of Acts 1 and 2 in An Inspector Calls?

How Does Priestly Build Up Tension at the ends of Acts 1 and 2 in An Inspector Calls? An Inspector Calls was written by J.B. Priestly in the 1940's. It is set in 1912 the week the Titanic sunk. It is about an upper class family who are celebrating their daughter, Sheila's engagement to Gerald Croft. An Inspector Goole arrives and begins to question them in relation to a girl who committed suicide. It turns out that they are all linked with the girl and have contributed in some way to her death. The Inspector then exits leaving the Birling family somewhat confused and perplexed. A phone call to the nearest police station reveals that there is no Inspector of the name Goole. The family now incredibly relived but still very confused begin to relax when the phone rings and a voice on the end tells them of a suicide and that an Inspector is on his way. The play gives a good insight into Priestly's political views on society at that time. It also gives a good example of the class system in 1912. This is shown in Mr. Birling's lines on page ten. Birling: the way some of these cranks talk and write now, you'd think everybody has to look after everybody else, as if we were all mixed up together like bees in a hive - community and all that nonsense... a man has to mind his own business and look after himself and his own. When he speaks of "cranks", he is talking about socialists of the time who were very much in the minority. Priestly was obviously of the socialist viewpoint as is demonstrated in the Inspectors speech on page 56. Inspector: One Eva Smith has gone - but there are millions and millions and millions of Eva Smiths and John Smiths still left with us... We don't live alone. ...read more.

Gerald thinks that she should leave but Sheila is adamant that she wants to stay. Sheila and Gerald's relationship begins to breakdown even more in this act. When Gerald says, "You've been through it - and now you want to see somebody else put through it," and Sheila replies, "So that's what you think I'm really like. I'm glad I realised it in time Gerald." This increase in tension between characters creates tension for the audience to watch and maintains their interest. Soon after this, Sheila becomes quite hysterical about the whole matter. Many pauses are used to emphasise certain words and phrases. "I know I'm to blame - and I'm desperately sorry - but I can't believe - I won't believe - it's simply my fault that in the end she - she committed suicide. That would be too horrible -." She does not want to be blamed for the girl's suicide; this all creates tension, as the audience want to know who is ultimately to blame for it. What the Inspector replies is, "we have to share something. If there's nothing else, we'll have to share our guilt." This can have different interpretations. The Inspector could simply be saying that all of the characters in the play have to share their guilt for the girl, which creates tension as the audience want to know who will be punished for the girl's suicide and how the other characters come into the matter. You could also interpret it as the fact that everyone has to share their guilt for all the problems in the world, things like the poor and the fact that everyone is as guilty as each other. This make the audience wonder about the Inspector and almost how much of an Inspector he really is. When Mrs. Birling enters, tension is immediately created by the way she enters the room. She enters briskly and self-confidently, quite out of key. ...read more.

It is left on a cliffhanger and every one wants to know what will be happening next and how exactly did Eric get involved and why. Eric clearly knows they know something as he comes in, turns pale, and looks distressed. This leaves the audience interpreting what will happen next and why for themselves. Tension is created all the way through this act using many different methods all of them affective. Priestly uses many different techniques to create tension throughout the whole play building them up as it draws nearer to the end. I think that silence and pauses are very important in the creation of tension as many people are at the edge of their seats wanting to know what happens next in the play. Leaving the ends of each act open to audience interpretation is also very effective and works well. This helps as it leaves the audience to try and think for themselves what might happen next and who else is involved and why and how. The conflicts between the characters relationships also help to create tension as the tension they create between themselves is also shown through into the plot of the play. Foreboding is also very important especially with the Inspector. He always seems to know what id going to happen next and is just trying to make them realise what they have done which in the end it turns out that is what he is trying to do. Foreboding help as the audience do not know the ending and want to know how the Inspector knows these things. I think that the most successful device that Priestly uses to create tension is the character of the Inspector. This is done very carefully and subtly, as the plot develops the Inspector seems to always be able to add a twist at critical moments just to keep the audience interested and to maintain the increase in tension. Priestly has very successfully created tension and maintained the interest of the audience throughout the play and both Acts 1 and 2. ...read more.