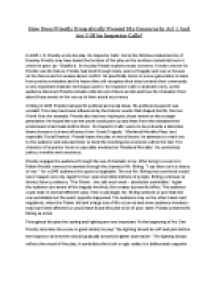 How Does Priestly Dramatically Present His Concerns In Act 1 And Act 3 Of An Inspector Calls?

﻿How Does Priestly Dramatically Present His Concerns In Act 1 And Act 3 Of An Inspector Calls? In 1945 J. B. Priestly wrote his play ?An Inspector Calls?. Set in the fictitious industrial city of Brumley Priestly may have based the location of the play on the northern industrial town in which he grew up ? Bradford. In his play Priestly explores many concerns. A main concern for Priestly was the future. Priestly had lived through many years of tragedy and war so focuses on the future and his unease about conflict. He specifically looks on a new generation to learn from previous mistakes and he hopes they will recognise their duty towards their community. A very important dramatic technique used in ?An Inspector Calls? is dramatic irony, as the audience discovers Priestly includes references to future events and how the characters feel about these events in the run up to their actual occurrence. Writing in 1945 Priestly had specific political and social ideas. His political viewpoint was socialist. This may have been influenced by the historic events that shaped his life, the two World Wars for example. Priestly also had very big hopes, these rested on the younger generation. He hoped the current youth could grow up and learn from the mistakes their predecessors had made before them. ...read more.

Towards the beginning the audience start to wonder why the seemingly happy atmosphere is oddly forced. Sheila shows curiosity about Gerald?s location throughout last summer and Eric is clearly nervous about something, this is clear when Priestly describes Eric at the start of the play. ?In his early twenties, not quite at ease, half shy, half assertive." This provokes interest in the audience who want to find out about what is going on! This of course is very dramatic as the audience are automatically listening intently already trying to unravel mystery. After the Inspector's arrival tension starts to mount in the Birling household. The Inspector interrogates all family members before discovering the vital truth. Every member of the Birling family including Gerald had a part to play in the death of Eva Smith. These new pieces of information help contribute to the construction of the story. ?You stole the money,? ?Damned Fool? Mr Birling especially displays the extreme tension of a divided family. The audience are shapes in their own minds the personality?s of the characters to which the audience members would give a positive or negative response to. The Inspector is always in control, not only does he control the tension but the pace also. ...read more.

Throughout the play the Inspector very much reflects priestly himself. This is clear when the Inspector delivers his final speech as it is not only addressed to the Birling Family but the audience also. ?One Eva Smith has gone - but there are millions and millions and millions of Eva Smiths and John Smiths still left with us, with their lives, their hopes and fears, their suffering and chance of happiness, all intertwined with our lives, and what we think and say and do.? The inspector talks of a collective responsibility. He believes every one in society is linked no matter what class, age or sex. These views reflect the views of the socialism movement to which J. B. Priestly was apart of. The Inspector sees society more important than individual gain. This completely contrasts Mr. Birling?s view in Act one. The Inspector goes on to issue a warning. If the people of Britain were to go on ignoring responsibility horrible things would happen. ?If men will not learn that lesson, when they will be taught in fire and blood and anguish.? Priestly is of course talking about the world war a 1940?s audience has just lived through. Priestley?s concern for the new generation to learn from previous mistakes may not be in vain. Both Eric and Sheila showed huge guilt at Eva Smith?s death contrasting greatly to their parents who did whatever they could to shift the blame. ...read more.