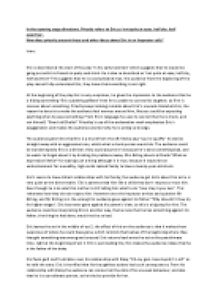 How does Priestly present Eric in &quot;An Inspector Calls&quot;?

﻿In the opening stage directions, Priestly refers to Eric as ?not quite at ease, half shy, half assertive?. How does priestly present these and other ideas about Eric in an Inspector calls? Intro: Eric is described at the start of the play "in his early twenties" which suggests that he would be going out with his friends to party and drink. He is also so described as "not quite at ease, half shy, half assertive" This suggests that he is a complicated man, the audience from the beginning of the play cannot fully understand Eric, they know that something is not right. At the beginning of the play Eric is very suspicious, he gives the impression to the audience that he is hiding something "Eric suddenly guffaws" then he is unable to control his laughter, as if he is nervous about something. ...read more.

Eric?s seems to have distant relationships with his family; the audience get hints about this as he is very quiet at the dinner table. Eric?s parents treat him like a child they don?t respect or trust him. Even though he is an adult his mother is still telling him what to do ?now stop it you two?. This reiterates how they do not respect him. However once the Inspector arrives and question Mr Birling, and Mr Birling is in the wrong Eric suddenly goes against his father ?Why shouldn?t they try for higher wages?. Eric has never gone against his parent?s view, so this is a big step for him. The audience could be interpreting this in another way, that as now that he has something against his father, the thing he had done, would not be so bad. Eric leaves the set in the middle of act 2, the effect of this on the audience is that It makes them suspicious of where he could have gone, which reminds themselves of the beginning where they thought something was wrong and unusual. ...read more.

In the beginning of the play he does not reply to his mother?s sniggering remarks towards, him however now he appalled by his parents inability to admit their own responsibility. He forcefully tells them ?I am ashamed of you?, Eric now has no respect for his parents and knows that they are bad people, who only care about their social class and appearance to the rest of Brumley. Eric learns that everyone should be equal and that his parents and Gerald are in the wrong, and that class is not the only thing that is important. He also learns that you need to take responsibility for the actions you have committed ?You may be letting yourselves of nicely, but I can?t?. As well as sticking up for yourself if someone is disrespecting you. In conclusion Eric is presented as a considerate and social aware man. He is more suites in the younger generation, with Shelia who believes in socialism and that you should take responsibly for your actions. ...read more.