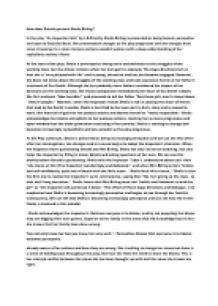 How does Priestly present Sheila Birling?

Transfer-Encoding: chunked ï»¿How does Priestly present Shelia Birling? In the play “An Inspector Calls” by J.B.Priestly, Shelia Birling is presented as being honest, perceptive and open to Socialist ideas. Her presentation changes as the play progresses and she changes from naïve innocence to a more mature and pro-socialist woman with a deep understanding of her capitalistic society’s flaws. At the start of the play, Shelia is portrayed as being naïve and oblivious to the struggles of the working class, but she shows remorse when her own guilt is exposed. The stage directions tell us that she is “very pleased with life” and is young, attractive and has just become engaged. However, she does not know about the struggles of the working class and soon expresses horror at her father's treatment of Eva Smith. ...read more.

When the Inspector starts questioning Gerald and Mrs Birling, Shelia not only insists on watching, but also helps the Inspector by filling in minor details and asking questions of her own. We can see this shortly before Gerald?s questioning, Shelia tells the Inspector ?I don?t understand about you? then ?she stares at him [The Inspector] wonderingly and dubiously? and when Mrs Birling enters ?briskly and self-confidently, quite out of touch with the little scene? Shelia feels this at once. ? Shelia is also the first one to realise the Inspector?s semi- omniscience, saying that ?No, he's giving us the rope - so that we'll hang ourselves.? Shelia insists that Mrs Birling must not ?build a wall between us and the girl? as ?the Inspector will just break it down,? The effect of these stage directions and dialogue, is to emphasise how Shelia is becoming increasingly perceptive and begins to see through her family's translucency. ...read more.

Priestley uses Sheila to show how the younger generation can change views & realise their mistakes. Shelia?s transformation from an immature girl to an emphatic and mature woman during the course of the play is used as evidence that the younger generation can stop and prevent tragedies such as Eva Smith?s death from happening. Priestly uses Shelia to show that people can change from their capitalistic and materialistic society. ways to a more Socialist and equal society. He does this by showing all the disadvantages of following the capitalist ways by using Sheila as an example and by this, it makes the audience realise the way they are living has a serious effect on the working class (the death of eva smith) and that they should change their ways (like Sheila did) and they will have more sense of morality in their conscience. She admits her guilt, saying that ?It was my own fault? and ?I?ll never, never do anything ? ...read more.