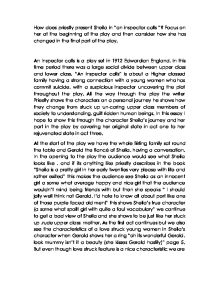 How does priestly present Sheila in &quot;an inspector calls &quot;? Focus on her at the beginning of the play and then consider how she has changed in the final part of the play.

How does priestly present Sheila in "an inspector calls "? Focus on her at the beginning of the play and then consider how she has changed in the final part of the play. An Inspector calls is a play set in 1912 Edwardian England, in this time period there was a large social divide between upper class and lower class. "An inspector calls" is about a Higher classed family having a strong connection with a young women who has commit suicide, with a suspicious inspector uncovering the plot throughout the play. All the way through the play the writer Priestly shows the characters on a personal journey he shows how they change from stuck up un-caring upper class members of society to understanding, guilt ridden human beings. In this essay I hope to show this through the character Sheila's journey and her part in the play by covering her original state in act one to her rejuvenated state in act three. At the start of the play we have the whole Birling family sat round the table and Gerald the fianc� of Sheila, having a conversation. In the opening to the play the audience would see what Sheila looks like , and if its anything like priestly describes in the book "Sheila is a pretty girl In her early twenties very please with life and rather ...read more.

We continue the story by seeing Gerald, Sheila's fianc� admitting to an affair with Daisy Renton /Eva Smith,Sheila's character seems to have made a turn because instead of being outraged and never forgiving Gerald she takes a more understanding view and appreciates Gerald Telling the truth towards the end of her conversation "Gerald I don't dislike you as I did half an hour ago in fact, in a rather odd way, I rather respect you more than ever" (p 40). For the next act Sheila's character is mostly absent and is not aware of the stories told by Mrs. Birling and her brother Eric but she returns in the final Act as the family all return except Gerald to discuss who is most responsible, they all discuss what they did with Sheila almost trying to prove she was the person most in the wrong "I know I had her turned out of her job I started it"(p56) but she doesn't do this out of love of hurt against someone, she does this because she is guilt ridden and she desperately wants to get the punishment for what she has done and priestly shows that. Then Mr B seems to do the same "look inspector id give thousands yes thousands" said Mr. ...read more.

this is an important quote as its telling exactly what's going on and shows that Sheila has changed "Because I remember what he said, how he looked and what he made me feel" Sheila again trying to push her own beliefs that she would of never brought to the surface until the inspector had came. But still the views of the parents were still solid unchanged "now look at them the famous younger generation they think they know it all" showing that still the generation before think they have a higher intellect and perfect view on life. Then we have the final cliff edge of the story (so to speak) when they get the phone call telling them that a girl has been found dead "committed suicide" and there will be an inspector coming to see them shortly. This is all a total shock to the characters and they end the play giving the audience the question of what will happen when the real inspector comes. So therefore priestly has shown Sheila as a child figure the person who learns lessons through experience like a child would if he touched something hot, he wouldn't touch it again. But I personally learning the lesson isn't the message in this play the message is again only explained by the doctors quote that I explained earlier in the essay that seems with only Sheila and Eric understood. ...read more.