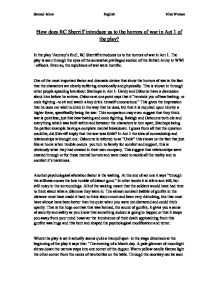 How does RC Sherriff introduce us to the horrors of war in Act 1 of the play?

How does RC Sherriff introduce us to the horrors of war in Act 1 of the play? In the play 'Journey's End', RC Sherriff introduces us to the horrors of war in Act 1. The play is seen through the eyes of the somewhat privileged section of the British Army in WWI - officers. Even so, the repulsions of war were horrific. One of the most important factor and dramatic device that show the horrors of war is the fact that the characters are clearly suffering emotionally and physically. This is shown in through other people speaking lots about Stanhope in Act 1- Hardy and Osborne have a discussion about him before he arrives. Osborne at one point says that it "reminds you of bear baiting- or cock fighting -to sit and watch a boy drink himself unconscious." This gives the impression that he does not wish to drink in the way that he does, but that it is required upon him by a higher force, specifically being the war. ...read more.

going to happen or that it keeps you away from your mind however the imminence of their death approaching from this gunfire was huge and this bent and shaped the psychological modification and terror. Where the play is set it actually seems quite a tranquil spot- in the stage directions at the beginning of the play it says this: 'The evening of a March day. A pale glimmer of moonlight shines down the narrow steps into one corner of the dugout. Warm yellow candle flames light the other corner from the necks of two bottles on the table. Through the doorway can be seen the misty grey parapet of a trench and a narrow strip of starlit sky.' It goes on like this to describe a scene that sounds light and a total contrast to the horrors of war that we have learned of in history lessons. At the end of Act 1 the stage directions say: 'Osbourne turns, and looks up the narrow steps into the night, where the Very lights rise and fade against the starlit sky.' ...read more.

His hope can only be destroyed by him dying- which is exactly what happens. In my opinion, RC Sherriff uses his portrayal of characters and relationships to show the horrors of war, but the scene that he paints for us the audience is maybe not a realistic presentation as he did not have the technology. The fact that the audience in 1929 were only ten years away from the end of the war and weren't prepared to collect the truth so soon. However this didn't stop the audience from recommending it to others although having been emotionally shocked. The attention was not so little that it didn't reach public eye also, lots of media on the subject of the earlier war was being released at the same time as Journey's End. I think that to this day the horrors of war still exist as well as they did previously because of the fact that the characters are presented in a manor that is recognized and comprehended by everyone and that is what would stay with them. ?? ?? ?? ?? Sameul Islam English Miss Watson ...read more.