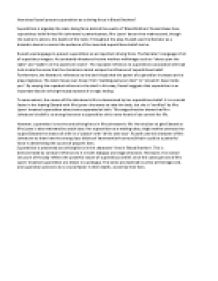 How does Russell present superstition as a driving force in Blood Brothers?

Transfer-Encoding: chunked ﻿May 18, 2017 How does Russell present superstition as a driving force in Blood Brothers? Superstition is arguably the main diving force behind the events of 'Blood Brothers'.Russel shows how supersitious belief drives Mrs Johnstone's powerlessness, Mrs Lyons' decent into madness and, though the women's actions, the deaths of the twins. Throughout the play, Russell uses the Narrator as a dramatic device to remind the audience of the invented superstitious belief can be. Russell uses language to present superstition as an important driving force. ...read more.

The devil moves ever closer, from "walking past your door" to "screamin' deep inside you". By varying the repeated refrence to the devil in this way, Russell suggests that superstition is an important factorin driving the play towards it's tragic ending. To some extent, the course of Mrs Johnstone's life is determined by her superstitious belief. It is a cruicial factor in her leaving Edward with Mrs Lyons- she wants to take him back, but she is "terrified" by Mrs Lyons' invented superstition about twins seperated at birth. ...read more.

Russell uses the character of Mrs Johnstone to show how the strong class divides of late-twentieth-century Britain could be a powerful force in determining the course of people's lives. Superstition is presented as a driving force in the characters' lives in 'Blood Brothers'. This is demonstrated by constant refrences to it in both dialogue and stage directions. Moreover, the overall structure of the play reflects the powerful nature of superstitious belief, since the consequences of Mrs Lyons' invented superstition are shown in a prologue. The twins are destined to arrive at thistragic end, and supersition proves to be a crucial factor in their deaths, as well as their lives. â Page ...read more.