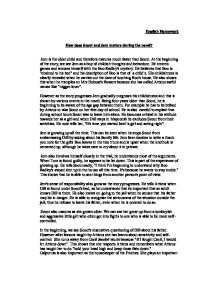 How does Scout and Jem mature during the novel?

English Homework How does Scout and Jem mature during the novel? Jem is the older child and therefore matures much faster than Scout. At the beginning of the story, we see Jem as a boy of childish thoughts and behaviour. He invents games and amuses himself with the Boo Radley's mystery. He believes that Boo is "chained to his bed" and his description of Boo is that of a child's. His childishness is clearly revealed when he carries out the dare of touching Boo's house. He also shows this when he tramples on Mrs Dubose's flowers because she has called Atticus awful names like "nigger-lover". However as the story progresses Jem gradually outgrows his childishness and this is shown by various events in the novel. Being four years older than Scout, he is beginning to be aware of the age gap between them. For example he has to be bribed by Atticus to take Scout on her first day of school. ...read more.

It's because he wants to stay inside." This shows that he is able to see things from another person's point of view. Jem's sense of responsibility also grow as the story progresses. He tells Atticus when Dill is found under Scout's bed, as he understands that its important that an adult knows Dill is there. He also insists on going to the jail when he senses that his father may be in danger. He is able to recognise the seriousness of the situation outside the jail; thus he refuses to leave his father, even when he is ordered to do so. Scout also matures as she grows older. We can see her grow up from a tomboyish and aggressive little girl who often got into fights to one who is able to be more self-controlled. In the beginning, we see Scout's insensitive questioning of Dill about his father. However after lessons taught by Atticus she has learns about sensitivity and self-control. ...read more.

She again behaves as Alexandra wants when she replies her ambition is to be "just a lady" after being questioned about her future. The greatest advance in her relationship with her aunt occurs at a missionary circle gathering when news is brought of Tom Robinson's death and Scout thinks that, "If Aunty could be a lady at a time like this, so could I." Scout has realised that ladylike behaviour can be more than a superficial facade; it can demonstrate strength of character. Finally Scout's ability to be a lady is longer doubted when one sees the kindness she extends to Boo once he has saved herself and Jem from Bob Ewell. She understands from Boo's little actions and gestures that he wants to see Jem again before he leaves. She also retains his dignity on the way home by making sure that he appears to be leading her rather than the other way round. Scout expresses regret that "we had never put back into the tree what we took out of it: we had given him nothing". This shows her maturity again. ...read more.