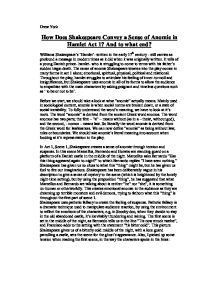 How Does Shakespeare Convey a Sense of Anomie in Hamlet Act 1, and to what end?

Drew York How Does Shakespeare Convey a Sense of Anomie in Hamlet Act 1? And to what end? Williams Shakespeare's 'Hamlet'- written in the early 17th century - still carries as profound a message in modern times as it did when it was originally written. It tells of a young Danish prince- hamlet- who is struggling to come to terms with his father's sudden tragic death. The sense of anomie Shakespeare weaves into the play comes in many forms in act 1 alone; emotional, spiritual, physical, political and relational. Throughout the play, hamlet struggles to articulate his feeling of inner-turmoil and insignificance, but Shakespeare uses anomie in all of its forms to allow the audience to empathise with the main characters by asking poignant and timeless questions such as ' to be or not to be'. Before we start, we should take a look at what "anomie" actually means. Mainly used in sociological context, anomie is when social norms are broken down, or a state of social instability. To fully understand the word's meaning, we have to look at it's roots. The word "anomie" is derived from the ancient Greek word anomos. The word anomos has two parts; the first - "a" - means without (as in a - theist, without god), and the second, - nomos - means law. So literally the word anomie is derived from the Greek word for lawlessness. We can now define "anomie" as being without law, rules or boundaries. We should take anomie's literal meaning into account when looking at it's representation in the play. In Act 1, Scene 1, Shakespeare creates a sense of anomie through tension and suspense. In this scene Marcellus, Bernardo and Horatio are standing guard on a platform of a Danish castle in the middle of the night. Marcellus asks Bernardo "Has this thing appeared again to-night?" to which Bernardo replies "I have seen nothing." ...read more.

Heaven and earth! Must I remember? why, she would hang on him, As if increase of appetite had grown By what it fed on: and yet, within a month-- Let me not think on't--Frailty, thy name is woman!-- A little month, or ere those shoes were old With which she follow'd my poor father's body, Like Niobe, all tears:--why she, even she-- O, God! a beast, that wants discourse of reason, Would have mourn'd longer--married with my uncle, My father's brother, but no more like my father Than I to Hercules: within a month: Ere yet the salt of most unrighteous tears Had left the flushing in her galled eyes, She married. O, most wicked speed, to post With such dexterity to incestuous sheets! It is not nor it cannot come to good: But break, my heart; for I must hold my tongue." This soliloquy shows the audience Hamlet's feeling of inner turmoil, emotional, and sometimes physical anomie. In the context of Hamlet's emotions, anomie takes on a new meaning, similar to anomie in it's social context, but not quite identical. Rather than the absence of law, Shakespeare uses anomie to create an absence of purpose. Shakespeare wants to show us Hamlet's psychological condition; the feeling of rootlessness and futility. The main difference between social and emotional anomie, is that social anomie is unrest on a large scale, and emotional anomie is unrest on a much more personal level. In the first two lines, it seems he is trying to show the audience his hatred of his physical existence, how he wishes he could "melt, thaw and resolve himself into a dew". He is saying how he feels his body is holding him, anchoring him to the earth that seems so pointless and trivial to him. He then talks of "the everlasting had not fixed his canon against self-slaughter." This seems suggest Hamlet would end his own life if god (the everlasting) ...read more.

The language used in the ghost's speech is powerful and descriptive, often using comparisons and metaphor to get a point across, such as "And curd, like eager droppings into milk." This overwhelms the audience with emotion, and leaves us with a rich picture of the events that have unfolded. The structure of the speech works to the same end, the first section, talking about how Claudius bought Gertrude's heart, the second, talking of how Claudius went about killing king Hamlet, then the third, pushing, pleading Hamlet to take revenge for his father, asking "Hamlet, remember me..." These two factors, coupled together by Shakespeare's masterful hand, provides the audience with a crystal clear picture of events, and lets readers and watchers alike form their own emotions and opinions on characters. Shakespeare has told stories of happiness and woe, set from Rome to Denmark, and created characters that please and tickle, to bloodthirsty and selfish hunchbacks. But, out of all Shakespeare's plays, Hamlet's tale of love, hate, tragedy and lonliness will echo on throughout history, his story remaining relevant and poignant to everyone across the globe, his struggle to find his purpose, his struggle with losing ones most dear to him. Shakespeare conveys Hamlet's feeling of anomie masterfully, allowing the reader to see the world through his eyes, to feel what he feels, and encourages us to look at our own lives and goals. To answer the question "How does Shakespeare convey a sense of anomie "Hamlet" Act 1, and to what end?", I would draw the conclusion that Shakespeare wants to give the audience the same feeling of unrest and anxiousness as the characters, to enhance the audience's experience and understanding of the plot. Shakespeare achieves this by using powerful and descriptive imagery to provoke audience reaction, and sometimes deliberate vagueness to heighten the feeling of tension. I believe that Shakespeare wants our emotions to reflect the emotions of the characters, or vice-versa, in different situations, and to make us question what we truly value most. "To be, or not to be. That is the question..." ...read more.