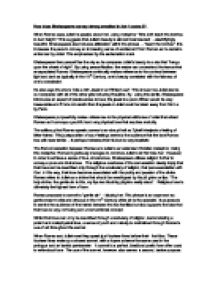 How does Shakespeare convey strong emotion in act 1 scene 5

How does Shakespeare convey strong emotion in Act 1 scene 5? When Romeo sees Juliet he speaks about her, using metaphor: "She doth teach the torches to burn bright!" This suggests that Juliet's beauty is almost incandescent - electrifyingly beautiful. Shakespeare also includes alliteration within the phrase - "teach the torches"; this increases the pace to convey an increasing sense of excitement from Romeo as he remains entranced by Juliet. This emphasised by the exclamation mark. Shakespeare then personifies the sky as he compares Juliet's beauty to a star that "hangs upon the cheek of night". By using personification, the reader can understand the trance that encapsulated Romeo. Shakespeare continually makes reference to the contrast between light and dark as typically in the 16th Century, one's beauty correlated with the fairness of one's complexion. He also says the she is 'Like a rich Jewel in an Ethiop's ear'. ...read more.

However, in order to achieve a sense of true, sincere love, Shakespeare utilises religion further to convey a pure and divine love. The religious overtones of the conversation clearly imply that their love can be described only through the vocabulary of religion, that pure association with God. In this way, their love becomes associated with the purity and passion of the divine. Romeo refers to Juliet as a shrine that should be worshipped by his pilgrims or lips. 'The holy shrine, the gentle sin is this, my lips two blushing pilgrims really stand'. Religious love is ultimately the highest form of love. Romeo proposed to commit a "gentle sin" - kissing her. This phrase is an oxymoron as gentle meant noble and virtuous in the 16th Century while sin is the opposite. Its purpose is to remind the audience of the hatred between the two families but also supports the idea that their love is very confusing and unconventional concept. ...read more.

When their passion has been broken up and Juliet has to be lead away by her nurse to the mother, then they can both still feel their love for each other. They are desperate to find out who one another is, but when Romeo finds out his words are 'my life is my foe's debt' and' so I fear, the more is my unrest'. These both show how happy is that he has found his true love but he has a sense of foreboding because she is a Capulet. Juliet also senses this foreboding 'my only love sprung from my only hate' are strong words to show how she doesn't know what will happen in the future, but she was in love with him before she knew his name and can't change her feelings. Here, Shakespeare inspires a feeling of loss and perhaps dejection; Juliet appreciates that her parents will not allow her love to unfold - 'my grave is like to be my wedding-bed'. ...read more.

This is a strong essay in terms of the analysis of structure and language. The examination of effects of the language chosen by Shakespeare is very detailed in places. There has been some attempt to contextualise the scene and consider its place within the whole play; specific textual references to other parts of the play could be included alongside the more general comments to show a clear understanding of the whole play. A summary that relates back to the question and the key scene would have enhanced the piece and enabled a more focused response to the essay title.