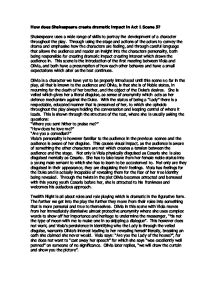 How does Shakespeare create dramatic impact in Act 1 Scene 5?

How does Shakespeare create dramatic impact in Act 1 Scene 5? Shakespeare uses a wide range of skills to portray the development of a character throughout the play. Through using the stage and actions of the actors to convey the drama and emphasise how the characters are feeling, and through careful language that allows the audience and reader an insight into the characters personality, both being responsible for creating dramatic impact creating interest which draws the audience in. This scene is the introduction of the first meeting between Viola and Olivia, and both have a presumption of how each other behaves and have a small expectations which alter as the text continues. Olivia is a character we have yet to be properly introduced until this scene so far in the play, all that is known to the audience and Olivia, is that she is of Noble status, in mourning for the death of her brother, and the object of the Duke's desires. She is veiled which gives her a literal disguise, as sense of anonymity which acts as her defence mechanism against the Duke. With the status of being a "Lady" there is a respectable, educated manner that is presumed of her, to which she upholds throughout the play always holding the conversation and keeping control of where it leads. ...read more.

Olivia also reveals begins to reveal herself to Viola. At the beginning she is very cynical and dismissive of the messengers speech, and remarks quite coldly when Viola refers to the Duke's love lying in his bosom, "O. I have read it: it is heresay." Further on in the conversation however she reveals a more honest and forthright insight into her feelings for the Duke. She states simply that no matter how suitable he is for her, and how many qualities he has, she wants to stick to the romantic notions of love and says simply to Viola, "But yet I cannot love him: He might have took this answer long ago." Dramatic irony is continually featured in Twelfth Night and especially in this scene, the audience is capable of knowing the immediate circumstances of the story than the actual characters within it do; the audience is able to see a discrepancy between character's perceptions and the reality they face. Viola and Olivia's beliefs become ironic because they are different from the reality of their immediate situation, and there intentions are likewise different from their actions will have. This not only creates tension between the characters, but between the audience and the characters as the audience has to wait in suspense for the truth to be revealed. ...read more.

The actors emphasise certain lines, and in some cases over act certain actions to emphasis certain parts to make the audience aware that either something humorous is happening a twist is being revealed in the plot. The reason this scene is so effective on its impact on the audience is because we are comparing two people who under their disguises are incredibly similar. They are both mourning the supposed death of their brothers, they are both originally of Noble status and they are both hiding the true objects of their affections. Both characters at the beginning of the scene were very formal and respectful of their different roles in society, end up letting down their guards, talking more familiarly and exposing subtly their vulnerabilities without it being too obvious to one another. This is clear for Viola through her jealousy and Olivia through her changing simple language and gentle tone. The dramatic irony that comes from the audience knowing the immediate circumstances of the story, and the characters being oblivious with entirely different perceptions of what reality they also face creates the tension and interest that makes the audience want to keep watching, which in affect is the whole objective of a play. ...read more.