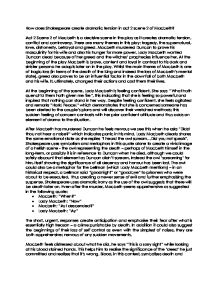 How does Shakespeare create dramatic tension in act 2 scene 2 of Macbeth?

How does Shakespeare create dramatic tension in act 2 scene 2 of Macbeth? Act 2 Scene 2 of Macbeth is a decisive scene in the play as it creates dramatic tension, conflict and controversy. There are many themes in this play: tragedy, the supernatural, love, dishonesty, betrayal and greed. Macbeth murdered Duncan to prove his masculinity for his wife and also his hunger for more power. Lady Macbeth wanted Duncan dead because of her greed and the witches' prophecies influence her. At the beginning of the play Macbeth is brave, content and loyal in contrast to his dark and sinister persona he adapts later on in the play. Whilst the main theme of Macbeth is one of tragic loss (in terms of the death of the King and indeed the loss of Macbeth's mental state), greed also proves to be an influential factor in the downfall of both Macbeth and his wife. It, ultimately, changed their actions and cost them their lives. At the beginning of the scene, Lady Macbeth is feeling confident. She says " What hath quench'd them hath given me fire", this indicating that she is feeling so powerful and inspired that nothing can stand in her way. Despite feeling confident, she feels agitated and remarks "Hark! ...read more.

Blood, in this context, symbolises death and pain and Shakespeare uses it to illustrate the situation involved; later on in the play both Macbeth and Lady Macbeth will experience pain and death. Macbeth then feels guilty, saying "Sleep no more! Macbeth does murder sleep! Sleep that knits up the ravelle'd sleeve of care, the death of each day's life..." We clearly see that Macbeth's mind is so dysfunctional, that he could never have inner peace and he speaks in the third person to imply that even he does not know who he is now, rather seeing himself from another perspective. Repetition is used on the word "sleep" about 8 times and Shakespeare uses different metaphors about the different uses of sleep to emphasize Macbeth's paranoia. Macbeth is saying that sleep is the rejuvenator of life. When we sleep, we dream of wonderful things we sometimes could never experience in reality. He's implying that he could never experience the good things in life anymore as his conscience would never let him. Shakespeare uses irony to create dramatic tension- Macbeth murdered Duncan in his sleep and he says that he has murdered sleep. Also that he wouldn't be able to go sleep anymore which is ironic because later on it is Lady Macbeth who would not be able to go to sleep. ...read more.

It was believed that if a king was murdered, the world simply wouldn't be balanced anymore. Shakespeare deliberately didn't show Duncan's murder in the play because the audience would have found it obscene and it would have definitely caused controversy. Lady Macbeth feels optimistic while on the contrary Macbeth feels pessimistic after he kills Duncan. However, later on the play Lady Macbeth's newly developed conscience starts to bother her and becomes mentally unstable, suicidal and frightened by her own husband. On the other hand Macbeth later on becomes conscienceless and brutal with his new found personality in contrast with at the beginning of the play when he was brave, content and loyal. The scene ends with Macbeth being the weaker link as he's the one with a guilty conscience and he shows he's weak by his dramatic speeches and because he's afraid to take the dagger and go back to the room.While on the other hand Lady Macbeth is the stronger link as she's the one with the plan and has not shown any sign of weakness, however she says "Had be not resembled my father as he slept I had done it". If Duncan hadn't resembled to her father while he was sleeping she would have killed Duncan herself which shows us that she has a soft side, despite being ruthless. This story has a moral; it teaches us to be happy with ourselves and what we've got. ...read more.

All areas seem to have been covered with a substantial amount of analysis in this essay as the candidate works through the Act. The idea of creating dramatic tension is both simple and complicated to write about in essays like ...

All areas seem to have been covered with a substantial amount of analysis in this essay as the candidate works through the Act. The idea of creating dramatic tension is both simple and complicated to write about in essays like this due to the broad range to write about which offers choice but has less of a focus, and the student has successfully developed points which do answer the question but at the same time are backed up with a response to do with the more specific themes of the play as well.

The analysis is clear and easy to follow, and points are developed and thoroughly explained without the candidate rambling or meandering too far away from what the question is asking. A good techinique is that the candidate has put each point and quote into context within the Act, so she can use how the characters may be feeling at that particular point as evidence as well (for instance, 'Lady Macbeth is irritated and ridicules him... he is powerful now that Duncan is dead'). Although individual points appear to be evaluted as the essay progresses, the overall conclusion could be improved, just to make general points about Shakespeare's techniques or how successful the candidate finds it.

Excluding one or two very tiny errors, the writing is perfectly accurate and eloquently written in a style that is not repetitive or confusing and is direct. In some cases, a couple more uses of terminology could be a benefit but as this is included in a few circumstances it would probably not make a huge difference.