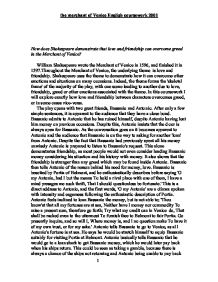 How does Shakespeare demonstrate that love and friendship can overcome greed in the Merchant of Venice?

How does Shakespeare demonstrate that love and friendship can overcome greed in the Merchant of Venice? William Shakespeare wrote the Merchant of Venice in 1596, and finished it in 1597.Throughout the Merchant of Venice, the underlying theme is love and friendship. Shakespeare uses the theme to demonstrate how it can overcome other emotions and situations on many occasions. Indeed, the theme forms the 'skeletal frame' of the majority of the play, with one scene leading to another due to love, friendship, greed or other emotions associated with the theme. In this coursework I will explore exactly how love and friendship between characters overcomes greed, or in some cases vice-versa. The play opens with two great friends, Bassanio and Antonio. After only a few simple sentences, it is apparent to the audience that they have a close bond. Bassanio admits to Antonio that he has ruined himself, despite Antonio having lent him money on previous occasions. Despite this, Antonio insists that the door is always open for Bassanio. As the conversation goes on it becomes apparent to Antonio and the audience that Bassanio is on the way to asking for another 'loan' from Antonio. Despite the fact that Bassanio had previously spent all his money unwisely Antonio is prepared to listen to Bassanio's request. This alone demonstrates friendship, as most people would not even consider lending Bassanio money considering his situation and his history with money. ...read more.

However, the casket test was carried out. Many suitors came. None stayed. Every suitor chose the wrong casket because they were influenced by appearances, not the true significance and properties. Gold was the most popular choice, closely followed by silver. Nobody chose lead. Why? Because every single suitor was influenced by the appearance, showing an aspect of greed within a person not usually seen. It would eventually leave Bassanio with Portia's hand in marriage, as he would be the one who was to choose the leaden casket, making the money he borrowed from Antonio well spent, perhaps for the first time in his life. In stark contrast to the manner of Antonio and the reserved calculating of Bassanio to choose the correct casket, I come to Shylock. Shylock is the jewish businessman who agreed to loan 3000 ducats to Bassanio with Antonio as surety, despite his dislike of Christians and of Antonio in particular. Act 3 Scene 1 tells us through Solerio and Solanio that Antonio's ships are at some narrow seas, where many ships have perished. Shylock enters at this point, and says that he would take Antonio's pound of flesh for nothing but revenge, were he not able to repay the loan. The motive for Shylock's hate is the racism between Jews and Christians, and in defence of ruthlessness concerning Antonio, he comes out with this famous phrase; 'If you prick us do we not bleed? If you tickle us do we not laugh? If you poison us do we not die? ...read more.

This perhaps could have been because she was a Jewish girl growing up in England, and she rebelled. Portia was probably brought up as a little 'princess' and so had nothing but admiration for her father. Each girl's social, cultural and historical background contributed to how they grew up and in turn got on with their parents. Throughout the play Shakespeare demonstrates different types of love and greed, and the different effects each of these can have. Antonio and Bassanio have a friendship almost comparable to love, indeed it could be called love. Ruthless and uncompassionate behaviour is shown by Shylock, seeking only his own way. This is a form of greed. The love between Jessica and Lorenzo is a love so powerful that it completely destroyed Jessica's relationship with her father, a sacrifice which she was willing to make. This is a different sort of love to that of Antonio and Bassanio, but both lead to hazardous situations. Why did Shakespeare demonstrate so many types of love, compassion, greed, anger and friendship? The repercussions of each was distinctive, and would perhaps show the audience what it would be like to be in each given situation. It could serve as a warning to show what happens when love becomes uncontrollably powerful, or when greed takes control of a person. What the play does show, is that no matter how good natured a person is, love does not always overcome greed, and that both emotions can make you blind to the truth. by Sammy Leal 11R ?? ?? ?? ?? the merchant of Venice English coursework 2001 ...read more.