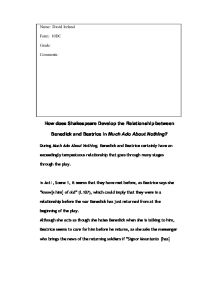 How does Shakespeare Develop the Relationship between Benedick and Beatrice in Much Ado About Nothing?

[image001.gif] Name: David Ireland Form: 10DC Grade: Comments: How does Shakespeare Develop the Relationship between Benedick and Beatrice in Much Ado About Nothing? During Much Ado About Nothing, Benedick and Beatrice certainly have an exceedingly tempestuous relationship that goes through many stages through the play. In Act I, Scene 1, it seems that they have met before, as Beatrice says she "know[s him] of old" (l.107), which could imply that they were in a relationship before the war Benedick has just returned from at the beginning of the play. Although she acts as though she hates Benedick when she is talking to him, Beatrice seems to care for him before he returns, as she asks the messenger who brings the news of the returning soldiers if "Signor Mountanto [has] returned from the wars or no?". This shows she cares about Benedick, and that she still has feelings for him of some kind. When Benedick comes back from the war, he and Beatrice meet for the first time in the play, which is the cue for a huge confrontation of wit and personality. This confrontational reaction to meeting is probably caused by the previous meeting between Beatrice and Benedick, as there is no evidence in this play why they act like they hate each other. ...read more.

The fact that Benedick is wearing a mask actually seems to make him and Beatrice braver, so that they feel they can speak their minds or say what they feel. Beatrice is braver because she isn't talking straight to Benedick's face, and Benedick is braver because he thinks Beatrice doesn't know that it is him beneath the mask. In Act II, Scene 3, when he "discovers" from Don Pedro, Claudio and Leonato that Beatrice loves him, Benedick appears to accept the fact almost instantly, because `the white bearded fellow' (Act II, Scene 3, l.106) said so, namely Leonato. Although at first he is surprised that someone as strong minded and set in her ways as Beatrice has freely admitted so to Hero, Benedick readily admits that he is now ready to commit to a relationship, as `when [he] said [he] would die a bachelor, [he] did not think [he] would live till [he] were married'. This shows how Benedick actually changes his whole view of life now that his feelings seem to have been returned. At the end of Act II, Beatrice still seems to hate Benedick, but Act II, Scene 1 seems to change her mind slightly. ...read more.

In Act IV, Scene 1, after Hero has been accused by Claudio, when Benedick goes to comfort Beatrice, the conversation that follows subverts the gender roles that Benedick and Beatrice represent. In line 258, Beatrice totally undermines the authority Benedick had and respect that Shakespearean women were supposed to show men by saying, `It is a man's office, but not yours.' This could either be insulting to Benedick, or she could care about him, and therefore does not want Benedick to get hurt by fighting Claudio. Beatrice subverts her role as a women, by crying, `Oh that I were a man!', which shows how passionate she was about avenging her good cousin's slander. In the final scene of the play, Beatrice and Benedick are at last brought together. This moment is not through their own willing, but overall by the will of Leonato, Don Pedro, Hero and the other "plotters", who bring them together by showing them letters from each other declaring their love that they had stolen from Benedick and Beatrice. Overall, Benedick and Beatrice have an extremely tempestuous relationship that fluctuates between love and hate over time, and they are finally brought together by the sneaky members of family and friends in the tale who wish to let the pair's hearts follow the route they wish to. ...read more.