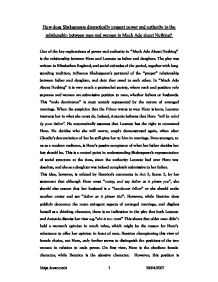 How does Shakespeare dramatically present power and authority in the relationship between men and women in Much Ado about Nothing? One of the key explorations of power and authority in "Much Ado About Nothing" is the relationship between Hero and Leonato as father and daughter. The play was written in Elizabethan England, and social attitudes of the period, together with long standing tradition, influence Shakespeare's portrayal of the "proper" relationship between father and daughter, and duty they owed to each other. In "Much Ado About Nothing" it is very much a patriarchal society, where rank and position rule supreme and women are submissive position to men, whether fathers or husbands. This "male dominance" is most acutely represented by the nature of arranged marriage. When the suspicion that the Prince wants to woo Hero is born, Leonato instructs her in what she must do. Indeed, Antonio believes that Hero "will be ruled by your father". He automatically assumes that Leonato has the right to command Hero. He decides who she will marry, amply demonstrated again, when after Claudio's denunciation of her he still gives her to him in marriage. Even stranger, to us as a modern audience, is Hero's passive acceptance of what her father decides her fate should be. This is a central point in understanding Shakespeare's representation of social structure at the time, since the authority Leonato had over Hero was absolute, and she as a daughter was indeed completely submissive to her father. ...read more.

Beatrice and Benedict are more mature and confident in themselves, and as such make a much more successful couple. Their conflict is based upon perceptions of male and female shortcomings, and it is those perceptions that make Claudio so susceptible to regard Hero as "sinful". However, Benedict and Beatrice are able to admit their own mistakes and think rationally of each other when faced with their own faults, as is apparent in their reflective soliloquies after their deceptions. Their relationship begins with mistrust and develops into love, while Claudio's and Hero's starts with love and develops into mistrust. This dramatic irony is used to reflect Shakespeare's own attitude on what a relationship should be, which is amplified by Benedict's humorous statement that he and Beatrice are "too wise to woo peaceably". It is clear from the play that Shakespeare criticises the existing customs and advocates that a courtship in which couples communicate would be a far more preferable way, and which would prevent the mistakes of perception evident in Claudio. Benedict's and Beatrice's relationship advocates a society in which women are given more power and authority by the very nature of a "merry war". Shakespeare is ambivalent in his representation of love. He uses it as a necessary component to restore harmony to a community. He also uses it as a challenge to both the males and females in the play, especially with male characters, indicating that male power they possess publicly, such as Claudio's warrior skills and Don Pedro's position doesn't affect matters of the heart. ...read more.

Shakespeare's use of puns and literary patterning when describing Claudio's outrage and pain "most Foul, most Fair" can be seen as an indication of male opinion of all faithless females. This fear of infidelity is also present among women. Beatrice's avowal that she would "rather hear a dog bark at a crow than a man swear he loves me" illustrates women's distrust. However, women's attitude is considerably different, as the song "Sigh no More" proves. They consider it as a fact of life, and while they distrust men, they don't consider it a "betrayal" to be treated as such, the way that men do. Men expect and demand total fidelity from a woman. However, in contrast, male fidelity is considered as a passing thing, never to truly be expected by any woman. Male honour demands that they protect women, but both Claudio and Leonato fail this task. Benedict, for the sake of his love of Beatrice, agrees to challenge Claudio and fight for the truth of Hero's fidelity. He remembers true honour, and the obligations that come with male power and position. Beatrice and Benedict, in concert, challenge the clearly wrong "honourable" male behaviour. Shakespeare shows that male rage at female betrayal led them to forget their own duty to women, leading to their own betrayal. This is Shakespeare's warning - while men have overt power and authority over women, the power comes with responsibilities which they are bound to fulfil. Beatrice's love reminds Benedict of this duty, demonstrating women's greatest power - to influence men's minds and hearts. ...read more.