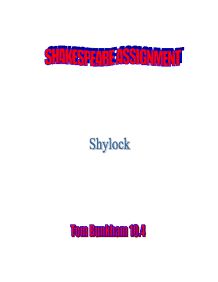 How does Shakespeare go about presenting Shylock as the villain of the play, to the audience?

How does Shakespeare go about presenting Shylock as the villain of the play, to the audience? The Merchant of Venice This essay is to put across the point that in this Shakespearian play Shylock, and Jews in general too, are regarded as evil. It is the medieval myth of the Jew that Shakespeare took his inspiration from. What he wrote is not the result of contact with the Jews of his time. It's likely that Shakespeare never met a Jew in his life. They were expelled from England in 1290, and did not return during Shakespeare's life. English society went over three centuries without any contact with them. In this time, it was easy for the myths to grow. And the myths were very harsh: The Jews were mysterious, scheming and greedy. Their religion was said to perform ritual sacrifices of Christian children. They were the servants of Satan. They stole and hoarded money. They were the agents of enemy countries. The list goes on and on. And because of these myths, Shylock is a horrible, mythical stereotype made human. Act 1 Sc 3 In our first glimpse of Shylock we see that his first words are about money. He uses a lot of repetition when he refers to his money; this indicates that he was obsessed with his money and that it was the only thing he thought about. ...read more.

"I am as like to call thee so again, To spit on thee again, to spurn thee too..." Act 2 Sc 5 In this scene we notice that Shylock treats his daughter Jessica like a servant and not like a daughter. His language is strict and commanding without any expression of kindness or love. "Jessica my girl, Look to my house, I am right loathe to go..." He shares his house with his daughter but never uses the term 'our' it's always 'my'. "There are my keys... Look to my house... There is some ill a-brewing towards my rest..." "Lock up my doors... But stop my houses ears... My sober house..." The only things that really matter to Shylock are his money and his house with its possessions. He uses personification to describe his house as being alive. "But stop my houses ears... Let not the sound of shallow foppery enter My sober house." In the trail scene, he says: "Nay, take my life and all, pardon not that. You take my house, when you do take the prop That doth sustain my house." In this scene there is another example of Shylocks literal use of words and his need to explain any use of poetic language, possibly to insult the person he is talking to or just to eliminate any confusion. ...read more.

Portia again tries to quietly persuade Shylock to accept the duckets offered. Shylock declines, and seems to be encouraged by the aspect of hope he has of wining the trial that Portia illustrated to him. "Bid me tear the bond" Here it becomes apparent that Portia begins to portray a worried attitude, as she is no longer convinced that she could win the case. She begins to beg which she had not resorted to so far in the trial. Shylock repeats his compliments of Portia and she schemingly develops confidence. " Have by some surgeon" Portia begins to unfold her plan, but Shylock is intent on receiving the merchant's life. He does not foresee that she is plotting against him. His frustration at not being to be able to take Antonio's life is high. This is a terrible thing for a man to think like this. It is possible that people at times in the play could feel sorry for Shylock, in Act 3 Scene 1 for example when Jessica runs away. However, it is shown that he is more bothered about the value of the items of his that she has taken, rather than his daughter herself. In Shakespearian times the Christian audience would also be less likely to sympathize with Shylock as the reputation of Jews, as you have read, was not a good one. ...read more.