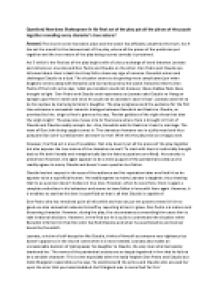 How does Shakespeare in his final act of &quot;Much Ado About Nothing&quot; put all the pieces of the puzzle together revealing every characters true nature?

Transfer-Encoding: chunked ﻿Question) How does Shakespeare in his final act of the play put all the pieces of the puzzle together revealing every character?s true nature? Answer) The church scene has taken place and the watch has officially unearthed the truth. Act 4 has set the mood for the denouement of the play, where all the pieces of the puzzle are put together and the true nature of the play being a sunny comedy is preserved. Act 5 which is the final act of the play begins with a furious exchange of word between Leonato and Antonio on one side and Don Pedro and Claudio on the other. Don Pedro and Claudio are informed about Hero?s death but they fail to show any sign of remorse. Benedick enters and challenges Claudio to a duel. The situation seems to be getting more complicated just when Dogberry enters along with Borachio and Conrad bound by the watch. Borachio informs Don Pedro of the truth as he says, ?what your wisdom could not discover, these shallow fools have brought to light.? Don Pedro and Claudio seek repentance as Leonato asks Claudio to ?Hang an epitaph upon Hero?s tomb and since he could not be Leonato?s soon-in-law?, Leonato asks him to be his nephew by marrying Antonio?s daughter. ...read more.

However, she again appears to be a mere puppet of the patriarchal society as she readily agrees to marry Claudio and doesn?t even question her father. Claudio has lost respect in the eyes of the audience and his reputation takes one final hit as he appears to be a superficial human. He readily agrees to marry Leonato?s daughter, thus showing that he as a person doesn?t believe in true love. However, when he sees Hero, there is again a complete volte-face in his behaviour and seems to have fallen in love with Hero again. However, it is needless to say that this love is superficial as that is all that Claudio is capable of. Don Pedro who has remained quite all this while and has not put the powers vested in him to good use also somewhat redeems himself by repenting at Hero?s grave. Don Pedro is a mature and discerning character. However, during the play, the circumstances surrounding him cause him to take irrational decisions. However, in the final act he is quick to understand the situation when Benedick informs him that Don John has fled Messina and when he sees Borachio and Conrad bound by the watch. ...read more.

Don John along with his villains is help prisoner and their villainy is also brought to light. The minor characters also make short appearances in this act. Dogberry manages to pull off another set of malapropisms and entertains the audience with slapstick humour. The image of Dogberry being a bumbling idiot remains constant. The play comes to an end putting all the suspense and deceptions to rest. Though the play is a sunny comedy, there still remains contention over how happy the ending truly is considering that Hero has been asked to remarry Claudio. Also, the friendship between Benedick and Claudio has taken a turn for the worse. Clearly Don Pedro is also somewhat depressed as he is the only person who remains a bachelor and had earlier showed some sparks of attraction towards Beatrice. However, these our minor issues which are resolvable. The major issues have been resolved and the characters have also matured over the course of the play. Thus, it can be conclusively said that the play ends on a merry note. Act 5 serves as a well organised denouement as all the pieces of the puzzle are put together and the true nature of every character is revealed. ...read more.