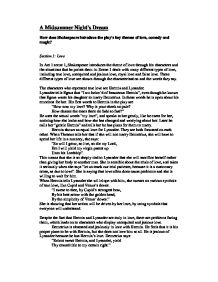 How does Shakespeare introduce the play's key themes of love, comedy and magic in A Midsummer Night's Dream?

A Midsummer Night's Dream How does Shakespeare introduce the play's key themes of love, comedy and magic? Section 1: Love In Act 1 scene 1, Shakespeare introduces the theme of love through his characters and the situations that he points them in. Scene 1 deals with many different types of love, including true love, unrequited and jealous love, royal love and false love. These different types of love are shown through the characterisation and the words they say. The characters who represent true love are Hermia and Lysander. Lysander tells Egeus that "I am belov'd of beauteous Hermia", even though he knows that Egeus wants his daughter to marry Demetrius. In these words he is open about his emotions for her. His first words to Hermia in the play are "How now my love? Why is your cheek so pale? How chance the roses there do fade so fast?" He uses the actual words "my love", and speaks to her gently, like he cares for her, noticing how she looks and how she has changed and worrying about her. Later he calls her "gentle Hermia" and tells her he has plans for them to marry. Hermia shows an equal love for Lysander. They are both focussed on each other. When Theseus tells her that if she will not marry Demetrius, she will have to spend her life in a nunnery, she says: "So will I grow, so live, so die my Lord, Ere I will yield my virgin patent up Unto his Lordship". ...read more.

For example he uses exaggeration when he says "I am to entreat you, request you, and desire you, to con them by tomorrow night", and when he suggests that Bottom as the Lion would shriek too scarily so the ladies in the audience would shriek "and that were enough to hang us all". He makes a joke out of Bottom by saying that he should play Pyramus who is "a sweet-fac'd man, a proper man as one shall see in a summer's day; a most lovely gentleman-like man". Bottom himself is the most obviously comic character. He is too confident in being a great actor, and he blows his own trumpet when he says "That will ask some tears in the true performing of it: if I do it, let the audience look to their eyes: I will move storms". He is suggesting that his performance will be so moving that the audience will be weeping rainstorms of tears. Later in the same speech, Bottom uses comic wordplay: "a part to tear a cat in, to make all split the raging rocks; and shivering shocks shall break the locks of prison-gates, and Phibbus' car shall shine from far, and make and mar the foolish Fates." This sounds like a great speech from a play, using rhythm and rhyme, but it does not actually mean anything at all. It is like an exercise for actors learning to speak on stage. Bottom thinks he could play every part. He says "let me play Thisby", "Let me play the Lion too". ...read more.

The juice of it is a love potion which will make somebody fall in love with any living creature, "on sleeping eyelids laid will make or man or woman madly dote upon the next live creature that it sees". He thinks that when she can only think of the creature that she has fallen in love with "be it on lion, bear, or wolf, or bull, on meddling monkey or on busy ape" she will be so busy that she will not think about the Indian boy any more, and will let Oberon have him. Then he will take the charm off with another potion. Puck flies off and brings the flower, and Oberon goes to find Titania. He gives some of the juice to Puck and asks him to put it on the eyes of an Athenian youth. Magical words in Act II of A Midsummer Night's Dream include magical creatures like fairy, elves, spirits, changeling, sprite, hobgoblin, mermaid. There are also magical images, like the fairy hanging pearls of dew in cowslips, elves hiding in acorn cups, a mermaid's song causing shooting stars, cupid firing arrows from his bow, flowers that are love potions, flying round the earth in forty minutes. I think one of the reasons Shakespeare uses so many magical words in this scene is to make the audience believe that the actors are playing magical beings. They have to see the fairies as being as small as flowers and able to fly even though they did not have any special effects, so this is done with the language. It is also important because in this play there are several different groups of characters, and the magic characters need a language of their own. ...read more.