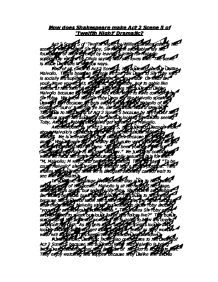 How does Shakespeare make Act 2 Scene 5 of 'Twelfth Night' Dramatic?

How does Shakespeare make Act 2 Scene 5 of 'Twelfth Night' Dramatic? Act 2 Scene 5 of 'Twelfth Night' by William Shakespeare is the scene in which Maria, Sir Toby, Sir Andrew and Fabian lay the foundation of their revenge by leaving a letter for Malvolio supposedly written by Olivia saying that she loves him. The scene is made dramatic in various ways. First of all, prior to Act 2 Scene 5, the audience already dislike Malvolio. This is because he feels he can talk down to Sir Toby who is socially his superior: "my masters are you mad? Or what are you? Have you no wit, manners, nor honesty, but to gable like tinkers at this time of night?" This makes the audience dislike Malvolio because he thinks he has more right to have control over Sir Toby. We know that Sir Toby does not like Malvolio speaking down to him because he gets angry and reminds Malvolio of his position: "out o' tune Sir, ye lie, art any more than a steward?" ...read more.

Malvolio is at the front of the stage, thinking he is alone, but secretly Sir Toby, Sir Andrew and Fabian are hiding behind a bush in the garden. This adds to the tension because the audience know the other characters are there and can hear everything. Malvolio starts to pretend to order Toby around: "you must amend your drunkenness." This makes Sir Toby angry and he starts to speak out loud: "shall this fellow live?" This builds suspense as the audience wonder if he is going to blow his cover and spoil the plot. As he gets more angry he speaks louder and louder and the audience get more and more tense as they wonder what will happen. This keeps them interested and involved. Further more, dramatic Irony also contributes to the drama of Act 2 Scene 5 because the audience know that Malvolio is being tricked and therefore feel they are part of the plot to humiliate him. They enjoy watching this happen because they dislike him and so enjoy watching him build up false hope when really none of what he believes is true. ...read more.

Finally, Maria's final speech at the end of the scene adds to the drama because it sums up the whole scene and reminds us of what is going to happen next. "He will come to her in yellow stockings, and 'tis a colour she abhors." She is talking to Sir Toby, Sir Andrew, Fabian and the audience. This involves the audience in the plot once again and leaves them in suspense waiting for the revenge on Malvolio. She says: "if you will see it follow me." She is inviting the audience to watch the rest of the play and involving them in the plot. Sir Toby then ends the scene by saying: "To the gates of tartar, thou most excellent devil of wit." He is urging the play on and filling the audience with excitement and anticipation. Therefore, in conclusion, it is clear that Shakespeare has successfully made this a dramatic scene. His use of stage directions, dramatic irony, language and imagery has created a build up of tension by revealing Malvolio's true character, involving the audience in the plot and making them look forward in anticipation to the rest of the play. ...read more.