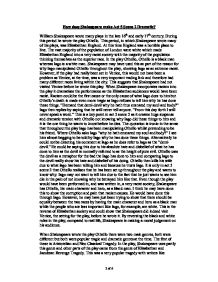 How does Shakespeare make Act 5 Scene 2 Dramatic? William Shakespeare wrote many plays in the late 16th and early 17th century. During this period he wrote the play Othello. This period, in which Shakespeare wrote many of his plays, was Elizabethan England. At this time England was a horrible place to live. The vast majority of the population of London were white which made Elizabethan England into a very racist society with the majority of the population thinking themselves as the superior race. In the play Othello, Othello is a black man whereas Iago is a white man. Shakespeare may have used this as part of the reason for why Iago manipulated Othello throughout the play, showing Iago as an extreme racist. However, if the play had really been set in Venice, this would not have been a problem as Venice, at the time, was a very important trading link and therefore had many different races living within the city. This suggests that Shakespeare had not visited Venice before he wrote this play. When Shakespeare incorporates racism into the play it dramatises the performance as the Elizabethan audiences would have been racist. Racism could be the first cause or the only cause of what Iago does to him but Othello's death is made even more tragic as Iago refuses to tell him why he has done these things. "Demand that demi-devil why he hath thus ensnared my soul and body?" Iago then replies by saying that he will never tell anyone. "From this day forth I will never speak a word." This is a key point in act 5 scene 2 as it creates huge suspense and dramatic tension with Othello not knowing why Iago did these things to him and it is the one thing he wants to know before he dies. The quotation is ironic in the sense that throughout the play Iago has been manipulating Othello whilst pretending to be his friend. ...read more.

I think that Shakespeare uses the repetition of this to show that Othello really can't leave Desdemona alone and wishes he doesn't have to kill her. Just as Othello is saying all of this to Desdemona, she wakes. It is at this point that Othello asks Desdemona to pray for forgiveness of her sins towards him. "If you bethink yourself of any crime unreconciled as yet to heaven and grace, solicit for it straight". Othello is saying to Desdemona to pray for what he thinks that she has done to him, he loves her and therefore wants her to go to heaven when he kills her. Had the play been set in the real Venice none of this would have happened as prostitutes and courtesans were celebrated. Othello then goes on to talk more about how he wishes not to kill her unprepared spirit and therefore asks her to make sure that she has prayed and apologized for her supposed wrong doing. Desdemona is in shock as she says "talk you of killing", Othello replies with a positive answer. This makes Desdemona fearful of her own death and starts to apologize in generalisation for all sins she has committed, not actually knowing what Othello is talking about. This created dramatic irony and high amounts of tension in the audience and in the scene as Desdemona knows not what she is dying for, if it will be her at all, and Othello has not asked her if she is innocent for the crime he has been told of. After a few more sentences of conversation between then Othello accuses her of the crime she has supposedly committed. Othello: That handkerchief which I so loved and gave thee, thou gav'st to Casio. Desdemona: No, by my life and soul! Othello: Sweet soul, take heed. Take heed of perjury: thou art on thy death-bed. Desdemona: Ay, but not yet to die. ...read more.

He makes it dramatic with the fact that Othello at the start was the main man, the army general but at the en of the play he has to kill himself to escape from his wrong doings. Act 5 Scene 2 is also made very dramatic by Shakespeare in the way that he lets the whole play unfold in the last scene, in the same room. He may have done this so that the audience are not distracted by scenery changes and that the tension and irony can all build up until the finale. In the last scene four people die which is very dramatic, as all deaths are, but to have four deaths of which three are all in the same room is very dramatic as they are all linked to one and other. Emilia's death was one of the most dramatic as she killed herself because it was her husband who has caused the misery and wrong doing of Othello and cause the death of Desdemona. Possibly the most dramatic thing that Shakespeare planned was that the audience were not to know how the play unfolds until the last minute. It is at this point that the play changes to being a tragedy in the same way that Romeo and Juliet does. Shakespeare adds racism to the play to show his moral views on how the attitude of Iago towards Othello caused such a dramatic and ironic ending to the play. The audience are left in a situation where they can think that it will go either way with Desdemona and Othello as when he is speaking to her alone while she is sleeping, he is talking of his love for her but also how she must die on this night. This creates a great amount of tension and dramatic irony as the plot of Iago planning against Othello throughout the play unfolds and when Othello realises what he has done and what Iago has done, it is the most dramatic and ironic part of the play. Look' ?? ?? ?? ?? 2 of 6 ...read more.