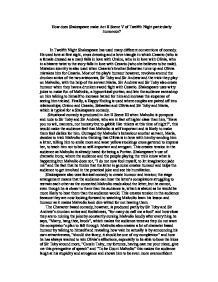 How does Shakespeare make Act II Scene V of Twelfth Night particularly humorous? In Twelfth Night Shakespeare has used many different conventions of comedy. He used love at first sight, cross dressing and a love triangle in which Cesario (who is a female dressed as a man) falls in love with Orsino, who is in love with Olivia, who in a bizarre twist to the story falls in love with Cesario (who she believes to be male). Mistaken identity is also used when Cesario's brother Sebastian turns up and Olivia mistakes him for Cesario. Most of the play's humour however, revolves around the drunken antics of the two aristocrats, Sir Toby and Sir Andrew and the trick they play on Malvolio, with the help of the servant Maria. Sir Andrew and Sir Toby also create humour when they have a drunken sword fight with Cesario. Shakespeare uses witty jokes to make fun of Malvolio, a hypocritical puritan, and lets the audience eavesdrop on him talking to himself to increase hatred for him and increase the suspense of seeing him tricked. Finally, a Happy Ending is used where couples are paired off into relationships; Orsino and Cesario, Sebastian and Olivia and Sir Toby and Maria, which is typical for a Shakespeare comedy. ...read more.

after everything he says, "Marry, hang thee, brock", which makes the audience tense as they do not want the conspirator's plan to fall through. Malvolio also creates a lot of character based humour by talking to himself and revealing how vain he actually is by announcing his own attractiveness, "should she fancy, it should be one of my complexion" and how he has always wanted to win Olivia's affections, especially to be able to boss the likes of Sir Toby around more, "Cousin Toby, my fortunes, having cast me your niece, give me this prerogative of speech" and "To be Count Malvolio" this makes the audience laugh at his stupidity and arrogance and shows him to be even more overconfident and boastful than they first thought, which increases the humour of the practical joke that he will later fall for and the tension of wanting to see the humiliation happen. In addition, satirical humour - which is the use of humour to mock corruption and vice - is used largely in Act II Scene V. Shakespeare casts Malvolio to be a Puritan, a group that were hated at the beginning of the seventeenth century, as they were predominantly known for being killjoys and severely religious, which further increases the audiences desire to see him shown up. ...read more.

To show the audience exactly how much of a fool Malvolio is going to look when he approaches Olivia, Maria tells Sir Andrew, Sir Toby and Fabian, "he will come to her in yellow stockings, and 'tis a colour she abhors; and cross gartered, a fashion she detests; and he will smile upon her, which will now be so unsuitable to her disposition, being addicted to a melancholy as she is" this shows the extent to which Malvolio has been fooled and makes the audience think that the ending is going to be more exciting than first thought and the prospect of Malvolio coming on stage wearing yellow stockings would be comical. Shakespeare has managed to use every convention of comedy in Act II; situational comedy is created in Scene III and in the trick in Scene V. Satire is used to mock Puritanism and the upper-class and comedy of character is created in both Malvolio and Sir Toby and Sir Andrew. Farce is created by the stage arrangement and the use of language creates humour in the form of a rude joke and in Maria's speech to remind the audience of Malvolio's pending humiliation. Finally Malvolio's concession to wear yellow stockings cross-gartered creates comedy of appearance. Because of all these types of comedy in one scene, Act II Scene V becomes a key part of the play. ...read more.