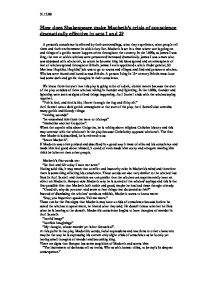 How does Shakespeare make Macbeths crisis of conscience dramatically effective in acts 1 and 2?

How does Shakespeare make Macbeth's crisis of conscience dramatically effective in acts 1 and 2? A person's conscience is affected by their surroundings, what they experience, what people tell them and their environment in which they live. Macbeth is set in a time where war is going on and things of a gothic nature happen often throughout the country. In the 1600s, as James I was king, the rate at which witches were persecuted increased dramatically. James I was a man who was obsessed with witchcraft, so when he became king his ideas spread and an atmosphere of fear of witches spread throughout Britain. James I even appointed a witch finder general, Sir Matthew Hopkins. Hopkins' job was to go to towns and villages and find and persecute witches. Witches were feared and hated across Britain. A person living in 15th century Britain must have had some dark and gothic thoughts in their conscience. We know from the start that this play is going to be of a dark, violent nature because the start of the play consists of three witches talking in thunder and lightning. In the 1600s, thunder and lightning were seen as signs of bad things happening. Act1 Scene1 ends with the witches saying together: "Fair is foul, and foul is fair, Hover through the fog and filthy air." ...read more.

Macbeth's conscience may be affected by certain peoples comments, even if they are not directly aimed at Macbeth. What Duncan says may affect Macbeth's conscience because it is a dramatically ironic comment about a seat in Macbeth's castle: "This castle hath a pleasant seat" If Duncan is praising Macbeth's seat it can imply that the seat is fit for a king. In Act1 Scene7 we see Macbeth having 2nd thoughts: "First, as I am his kinsman and his subject, strong both against the deed" He has 2nd thoughts when he says he might also be killed if vengeance is taken because what goes around comes around: "But in these cases..." In the 1600s it was tradition to be extremely kind and generous and helpful to whoever you were hosting, and killing your host is the complete opposite. With many for and against arguments going around in Macbeth's mind he must have had a crisis of conscience and moral confusion in his mind. Lady Macbeth uses emotional blackmail to push Macbeth to kill Duncan: "From this time such I account thy love." Lady Macbeth calls Macbeth a coward if he does not go through with it: "And live a coward in thine own esteem" Lady Macbeth shows her desire for Macbeth to become king by using strong words and telling Macbeth she would kill her own baby if Macbeth does it: "I would, while it was smiling in my face, have plucked my nipple from his boneless gums and dashed the brains out, had I so sworn as you have done this." ...read more.

Macbeth is constantly be plagued by the thought of the hugeness of the act he has done: "No: this my hand will rather the multitudinous seas incarnadine, making the green one red." When the porter knocks on the door we can clearly see the expression of fear on Macbeth's face and he quickly washes his hands. When the porter jokes about being the porter to hell, it is very ironic because this could be a sign of dead Duncan going to hell or even a sign that Macbeth is going to go to hell. During Act2 Scene3 when Macbeth is talking to Lennox and Macduff, Macbeth cannot speak confidently and talks in very short sentences as if he is a shy person. This tells us that he is hiding something or is very nervous and tense. It is again another example of Shakespeare using vocabulary and the way in which Macbeth speaks to express Macbeth's mental and psychological crisis. The expressions on Macbeth's face when talking to other characters are different before and after the murder. When Macduff asks Macbeth why he killed the guards, Macbeth strongly and vigorously defends his actions, speaking loudly and displaying both aggressive and worried expressions on his face. Shakespeare uses many different ways to make Macbeth's crisis of conscience seem dramatically effective to us in Acts1 and 2. We see this come out in the setting, the music played in the background, Macbeth's actions, Macbeth's facial expressions, Macbeth's use of vocabulary and the way he speaks and Macbeth's reactions to other characters. 31.12.08 ...read more.