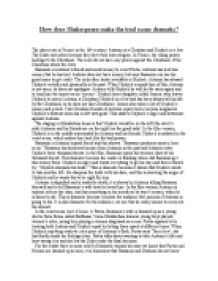 How does Shakespeare make the trial scene dramatic?

﻿How does Shakespeare make the trial scene dramatic? The play is set in Venice in the 16th century. Antonio is a Christian and Shylock is a Jew. They hate each other because they love their own religion. In Venice, the ruling power belongs to the Christians. The Jews do not have any power against the Christians, if the Christians abuse the Jews. Bassanio is Antonio?s friend and needs money to court Portia, Antonio has lent him money that he has lost. Antonio does not have money, but says Bassanio can use his good name to get credit. The only other lender available is Shylock. Antonio has abused Shylock verbally and physically in the past. When Shylock reminds him of this, Antonio is not sorry, he does not apologise. Antonio tells Shylock he will do the same again and to lend him the money as an ?enemy?. Shylock has a daughter called Jessica, who leaves Shylock to marry Lorenzo, a Christian (Shylock is a Jew and has been abused all his life by the Christians, so he does not like Christians). ...read more.

He sharpens the knife with his shoe, and this is showing the anger of Shylock and he wants this to be right for him. Antonio is dignified and is ready for death, it is shown by Antonio telling Bassanio farewell and to tell Bassanio?s wife how he loved him. In the film version Antonio is topless, sits on the chair, and has something in his mouth so he won?t scream, when he is about to die. This is dramatic because it makes the audience feel anxious if Antonio is going to die. It is also dramatic for the audience; we see that he really means to carry out his interest. In the court scene (Act 4 Scene 1) Portia, Bassanio?s wife is dressed up as a young doctor from Rome called Balthasar. Some Elizabethan humour young boys played women?s roles, young boy playing a woman disguised as a man. Portia appears to be treating both Antonio and Shylock equal by letting them speak at different times. ...read more.

Shylock also has an argument Gratiano and calls Shylock a dog, bloody, starved and ravenous. Gratiano recovers more than Bassanio to talk to Shylock because he is not as close as Bassanio is to Antonio. Shylock is strict with the law because he wants everything to be right for him and wants nothing to wrong, and he wants to stick with his bond. Shylock loses everything at the end of the scene, even his faith; this is dramatic because when we thought that Shylock was going to kill Antonio, now it has turned to Antonio. Now Antonio is in control and he tells the Duke that Shylock should presently become a Christian. This is dramatic becomes Shylock has been a Jew all his life and know he is forced into a Christian; this is a shock to the reader. The climax of Antonio and Shylock?s relationship is that both of them want to ruin each other?s life. Antonio is the strongest out of Shylock because he is a Christian, and in Venice Christians have the ruling power. Essay written by Brandon. Ariathas ...read more.