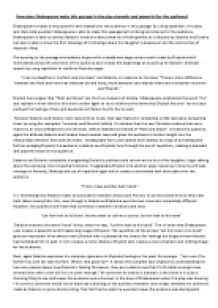 How does Shakespeare make this passage from Act 3 Scene 1 dramatic and powerful for the audience?

﻿How does Shakespeare make this passage in the play dramatic and powerful for the audience? Shakespeare creates a very powerful and dramatic for the audience in this passage. By using repetition, tri-colons and rhetorical question Shakespeare is able to make this passage both striking and intense for the audience. Shakespeare is able to convey Shylock?s emotions about what he is feeling when he is abused by Salarino and Solanio but also is able to show the first showings of his feelings about his daughter?s elopement and the destruction of Antonio?s fleet. The opening to the passage immediately begins with a deadly and angry serious point made by Shylock which immediately draws the attention of the audience and creates the beginnings of a build-up to Shylock?s dramatic speech by using repetition to reinforce Shylocks anger. ?I say my daughter is my flesh and my blood? and Salarino in response to this says, ?There is more difference between thy flesh and hers than between jet and ivory; more between your bloods that there is between red wine and Rhenish.? Shylock here argues that ?flesh and blood? are the true measure of kinship. ...read more.

This fact that he asks the question leaves the audience wandering what Shylock response will be, creating tension and further dramatizing this part of the scene. Shylock begins his speech by reminding the audience of the pain Antonio has caused him. Shakespeare starts by listing how and what pain Antonio has inflicted up him. ?He hath disgraced me, and hindered me half a million; laughed at my losses, mocked at my gains, scorned my nation, thwarted my bargains, cooled my friends, heated mine enemies; and what?s his reason? I am a Jew?. Shakespeare allows the audience to sympathise, with how Shylock is feeling, they also able hear the anger and fury in Shylock?s voice. Shakespeare uses powerful words like ?mocked?, ?scorned? and ?thwarted? which all have dark connotations to convey Shylock anger, creating powerful and dramatic atmosphere around Shylock. In his effort to justify his planned revenge on Antonio, Shylock reminds his fellow Venetians that a Jew has the same capacities as a Christian, and is therefore allowed to succumb to the same emotions as a Christian. ?Hath not a Jew hands, organs, dimensions, senses, affections, passions; fed with the same food, hurt with the same weapons, subject to the same diseases.? Probably the most famous line in the ?Merchant of Venice, Shylock begins to elaborate on the point that everyone is human. ...read more.

The comment emphasises the anger Shylock is feeling but also gives the audience the sense that he is in fact quite villainous. Having said that, Shylock says he feels cursed (bad luck) and thinks bad things happens to him which casts him into a different light and makes the audience feel somewhat more sympathetic. Shylock again insist he will carry out and have his planned revenge. Shakespeare uses only repetition in Shylock?s last two lines of the scene. ?What, what, what? Ill luck, ill luck.? And ?I thank God, I thank God. Is it true, is it true?? Shakespeare uses repetition to show Shylock?s excitement at hearing the news of Antonio?s disaster; here the audience see him somewhat pleased at a chance to carry out his revenge. It again plays on the idea that Shylock is a villain. The insistence that he will get his revenge ends the scene powerfully but also dramatically with a sense of darkness. Overall, Shakespeare is able to create a dramatic and powerful scene for the audience; through the use of imagery, metaphors, repletion, rhetorical questions and tri-colons he successfully is able convey Shylock?s emotions effectively and give us a further insight in how he is really feeling as well as show us how some Christians interact with Jews creating further a compelling and dramatic scene. ...read more.