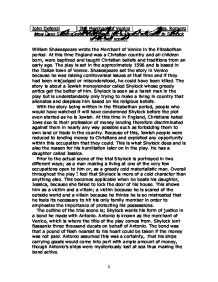 How does Shakespeare manipulate the audience response to Shylock in the trial scene?

John Defenzi The Merchant of Venice Miss. Romero How does Shakespeare manipulate the audience response to Shylock in the trial scene? William Shakespeare wrote the Merchant of Venice in the Elizabethan period. At this time England was a Christian country and all children born, were baptized and taught Christian beliefs and traditions from an early age. The play is set in the approximately 1596 and is based in the Italian town of Venice. Shakespeare set the story in Venice because he was raising controversial issues at that time and if they had been misjudged or misunderstood, he could have been killed. The story is about a Jewish moneylender called Shylock whose greedy antics get the better of him. Shylock is seen as a harsh man in the play but is understandably only trying to make a living in country that alienates and despises him based on his religious beliefs. With the story being written in the Elizabethan period, people who would have watched it will have condemned Shylock before the plot even started as he is Jewish. At this time in England, Christians hated Jews due to their profession of money lending therefore discriminated against them in nearly any way possible such as forbidding them to own land or trade in the country. ...read more.

daughter is my flesh and blood" When he says this it is like he is saying Jessica was a part of him and that now she is gone he feels like a broken man. He turns into a coldhearted man when he screams in rage showing his emotions and strong views; "My daughter! O my ducats! O my daughter! Fled with a Christian! Only Christian ducats!" This statement shows his hateful beliefs towards Christians but also shows an evil man inside who feels that his wealth is more important than the life of his daughter. During Shylocks famous plea for equality speech in Act 3: Scene 5; "What's his reason? I am a Jew. Hath not a Jew eyes? Hath not a Jew hands, organs, dimensions, senses, affections, passions fed with the same food, hurt with the same weapons". In Elizabethan times, the audience would probably have felt very little sympathy towards him due the prejudice and moral issues which they would have held against him whereas, an audience of today will more likely have felt very sympathetic to him. This is because all Shylock is trying to say is that we are all the same as one another, but are pushed apart by religious beliefs and traditions. ...read more.

Shylock can be seen as both comic and tragic because of his quick-witted responses, almost playing with the insults that are thrown at him from day to day, and tragic because of the loss of his daughter, friend and possessions. I think because he has been driven to the edge of insanity, from the torment and prejudice pushed on him throughout his life by his own Venetian community. That has led him to such misfortune and bitterness. Overall, Shakespeare manipulates the audience to Shylock using contradictory emotions. He builds Shylock up in a serious fashion using legal events but then quashes these with wit and comic. He leaves the audience believing that Shylock is a weak, broken man with nothing and this will have been once again, due to the ethnic issues held against him due to his religion whereas the Christians in the trial scene are seen as the heroes. Because of this, the audience would have felt righteous towards Shakespeare and his social beliefs. A modern audience may have a slightly different perspective on this due to the type of society we live in today. I feel that they would be more sympathetic towards Shylock due to his misfortune but this would be counteracted with the fact that Shylock has got what he deserves, due to his hatred towards another religious group. 1 ...read more.