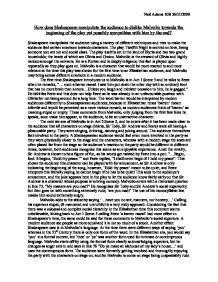 How does Shakespeare manipulate the audience to dislike Malvolio towards the beginning of the play yet possibly sympathise with him by the end?

How does Shakespeare manipulate the audience to dislike Malvolio towards the beginning of the play yet possibly sympathise with him by the end? Shakespeare manipulates the audience using a variety of different techniques and tries to make the audience feel certain emotions towards characters. The play Twelfth Night is centred on love, being someone you are not and social class. The play itself is set in the land of Illyria and has two grand households; the heads of which are Olivia and Orsino. Malvolio is the steward of Olivia and highly ranked amongst the servants. He is a Puritan and is deeply religious; this fact is played upon repeatedly as they play goes on. Malvolio is a character that would be more reacted to and more relevant at the time this play was shown for the first time to an Elizabethan audience, and Malvolio may bring across different emotions in a modern audience. The first time Shakespeare introduces us to Malvolio is in Act 1 Scene 5 and he talks to Feste when he remarks, "... such a barren rascal. I saw him put down the other day with an ordinary fool that has no more brain than a stone...Unless you laugh and minister occasion to him, he is gagged." He belittles Feste and this does not help Feste as he was already in an unfavourable position with Olivia for not being around for a long time. The word barren would be interpreted by modern audiences differently to Shakespearean audiences, because in Elizabethan times 'barren' meant infertile and would be perceived as a more vicious remark, as modern audiences think of 'barren' as meaning stupid or empty. ...read more.

She says she will drop a letter for Malvolio to find and it will be written in Olivia's handwriting as Maria can write very much like her, and this is Shakespeare using dramatic irony, when the audience knows something but the characters do not and, it causes great amusement amongst the characters. We do not get to the scene with the joke until another scene that goes back to the main plot, with Sebastian and Viola. In the beginning we see a soaked Viola come to shore and make a plan to dress like a young boy that can sing and go and work for Orsino, who she falls in love with after meeting him. She thinks her brother has died at sea but he survived. This scene is where it is in play because the play is a love story at heart and this scene adds to the structure of the play and brings the element of love back to the audience's minds. The next scene is when Malvolio is in Olivia's garden and he is imagining himself with Olivia. He totally arrogant in line 41, "...having come from a day-bed..." imagining he has just come back from making love to Olivia. This makes the listening Sir Toby very angry and he can hardly contain himself from his hiding spot. . Linking back to Act 2 Scene 3 when Malvolio was acting well out of his status, he is only a steward; a servant to Olivia, and he is imaging himself getting married to her and saying how good he looks. ...read more.

His letter is another dramatic device and gets a reaction from Olivia and Feste on stage, and shows the contrast between Malvolio's situation and the now resolved lover's storyline. To augment Malvolio's downfall, Olivia remarks, "Alas, poor fool, how they have baffled thee!" and before he thought this lady was in love with him a few moments again and now she is adding to his total humiliation by calling him a fool and she makes out he is disconcerted and stupid for letting himself be caught up in this hoax. Feste is still keeping the joke going, by revealing to everyone on stage (which by now is the full cast!) what Malvolio said to 'Sir Topas', who was actually Feste at that point in the plot. He mentions his private thoughts, when Malvolio thought he was privately confiding in a priest of his faith, and this is another attack on his Puritanism. Both modern and Shakespearean audiences would feel this joke has gone too far and is not amusing any more but is cruel. After questioning Fabian confesses and says he does not want to ruin the lovers' happiness. Line 345 says there was a reason for the cruelty, Malvolio did go above his status, and reminds the audience that there was a reason for this revenge. In conclusion, Shakespeare definitely manipulates the audience to dislike him in the early Acts and he does make us feel sympathy towards the end as the audiences feel that the joke has gone too far. It was funny to start with, but the things Malvolio did were not equal to the bullying he received, both modern and Shakespearean audiences feel sympathy for Malvolio at the end of the play. ?? ?? ?? ?? Neil Adams 10B 26/11/2008 ...read more.