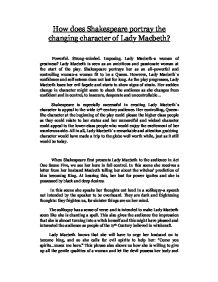 How does Shakespeare portray the changing character of Lady Macbeth?

How does Shakespeare portray the changing character of Lady Macbeth? Powerful. Strong-minded. Imposing. Lady Macbeth-a woman of greatness? Lady Macbeth is seen as an ambitious and passionate woman at the start of the play. Shakespeare portrays her as an all-powerful and controlling woman-a woman fit to be a Queen. However, Lady Macbeth`s confidence and self esteem does not last for long. As the play progresses, Lady Macbeth loses her evil fa�ade and starts to show signs of strain. Her sudden change in character might seem to shock the audience as she changes from confident and in control, to insecure, desperate and uncontrollable... Shakespeare is especially successful in creating Lady Macbeth`s character to appeal to the wide 17th century audience. Her controlling, Queen-like character at the beginning of the play could please the higher class people as they could relate to her status and her unmerciful and wicked character could appeal to the lower-class people who would enjoy the excitement of her murderous side. All in all, Lady Macbeth`s remarkable and attention grabbing character would have made a trip to the globe well worth while, just as it still would be today. When Shakespeare first presents Lady Macbeth to the audience in Act One Scene Five, we see her here in full control. ...read more.

done: "I would, while it was smiling in my face, have plucked my nipple from his boneless gums and dashed the brains out."Here she uses emotional blackmail and the phrase paints the most horrific image as the words "plucked" and "dashed" are extremely harsh and ruthless words, especially to be related with a tiny, helpless infant. Shakespeare phrases the dialogue in a way that makes Lady Macbeth sound like a very commanding woman: "when you durst do it then you were a man."Here she is manipulating Macbeth by insulting his virility. She knows exactly what she wants and keeps interrupting Macbeth and this helps her get the better of him. Lady Macbeth also uses personal pronouns such as "us" and "we" to try and encourage her husband and to help him understand that they are in the situation together. In the end, Lady Macbeth manages to persuade her husband and so Macbeth agrees to murder his king. Women of the 17th century would definitely admire Lady Macbeth`s character in this scene as she seemed to be in control of her husband Macbeth and women of those times were thought to be inferior to men. Later on in Act Two Scene Two, Lady Macbeth is still portrayed as a courageous and commanding woman, but this is where the audience might seem slightly disturbed by her actions. ...read more.

The fact that Lady Macbeth doesn`t realize she is being watched by the nurse and doctor gives us a clear insight to what other people think of her strange behavior. I think that this is where the audience might be slightly disappointed that she`d blown her cover and that she was facing this terrible meltdown. The doctor says "remove her from the means of all annoyance," which basically means anything she could use to harm herself should be removed. This shows us how the doctor knows she is facing psychological malfunctioning and that she could be very dangerous in the way that she might be capable of seriously harming herself. Personally, I think Lady Macbeth deserved her downfall at the end of the play. I believe that this was her punishment for being so greedy and selfish and for also dragging other people into her selfishness and yet all her greed earned her nothing. She had now lost her relationship with her husband, she lost all of her royalty and she just had to live the rest of her life with the guilt growing inside her. It seemed that the only way she could find peace was "by self and violent hands," to kill herself... ?? ?? ?? ?? ...read more.