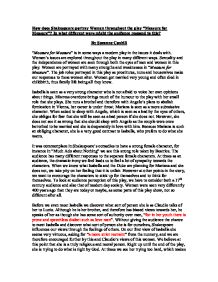 How does Shakespeare portray Women throughout the play &quot;Measure for Measure&quot;? In what different ways might the audience respond to this?

How does Shakespeare portray Women throughout the play "Measure for Measure"? In what different ways might the audience respond to this? By Suzanne Coxhill "Measure for Measure" is in some ways a modern play in the issues it deals with. Women's issues are explored throughout the play in many different ways. Sexuality and the independence of women are seen through both the eyes of men and women in this play. Women are portrayed with many strengths and weaknesses in "Measure for Measure". The job roles portrayed in this play as prostitutes, nuns and housewives make our responses to these women alter. Women got married very young and often died in childbirth, thus family life being all they knew. Isabella is seen as a very strong character who is not afraid to voice her own opinions about things. Mistress overdone brings much of the humour to the play with her small role that she plays. She runs a brothel and therefore with Angelo's plans to abolish fornication in Vienna, her career is under threat. Mariana is seen as a more submissive character. ...read more.

Without giving the audience the chance to meet Isabella and discover what sort of person she is for ourselves, Shakespeare influences our views through the feelings of others. On our first view of Isabella she seems very virtuous, asking for "a more strict restraint" from the nunnery, and we are therefore encouraged further by this and Claudio's views of this woman. We believe at this point that she is a truly religious and moral person. Right up until the end of the play, she is trying to do what is right by God. At times we see her trying too hard, which makes her turn out looking not so pure, for instance when she condemns her brother and tells him he "must prepare yourself for death". She wants Vienna to be a clean and pure city, much like the Duke does, "there is a vice that most I do abhor, and most desire should meet the blow of justice". The Duke and Isabella become closer throughout the play, maybe due to the similarities in character of the two, this being one of them. At the beginnings of her arguments with Angelo, Isabella only says what she needs to say, and no more. ...read more.

This almost makes Angelo sound jealous of Isabella's innocence and we again feel sympathy towards her as we believe there to be no escaping this evil dilemma she is stuck in. "Better it were a brother died at once that that a sister, by redeeming him should die forever", she seems more concerned with her own salvation than with her brothers life at this point and we lose any sympathy we once had. The spiteful comments she makes at her brother, "I'll pray a thousand prayers for thy death", show a woman who is not as kindly as we once assumed. We have to wonder at this point however, if her defensive attitude is anything to do with guilt. To save her chastity, Isabella is sacrificing her brother. She is clearly unsure, which is the worse crime to God. At this point of the play, we can see where the attitudes of a 21st century audience and those of a 17th century audience would oppose each other. Today, an audience would find it hard to understand giving up a brother in order to save their virginity. As religion was much more important in everyday life in the 17th century, this audience could probably understand the decision made by Isabella a lot more. ...read more.