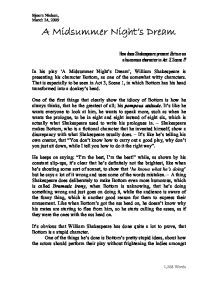 How does Shakespeare present Bottom as a humorous character

A Midsummer Night's Dream How does Shakespeare present Bottom as a humorous character in Act 3, Scene 1? In his play 'A Midsummer Night's Dream', William Shakespeare is presenting his character Bottom, as one of the somewhat witty characters. That is especially to be seen in Act 3, Scene 1, in which Bottom has his head transformed into a donkey's head. One of the first things that clearly show the idiocy of Bottom is how he always thinks, that he the greatest of all; his pompous attitude. It's like he wants everyone to look at him, he wants to speak more, such as when he wants the prologue, to be in eight and eight instead of eight six, which is actually what Shakespeare used to write his prologues in. - Shakespeare makes Bottom, who is a fictional character that he invented himself, show a discrepancy with what Shakespeare usually does. - It's like he's telling his own creator, that "You don't know how to carry out a good play, why don't you just sit down, while I tell you how to do it the right way". He keeps on saying: "I'm the best, I'm the best!" ...read more.

But it's like Bottom comes up with all these silly, fussy suggestions just to say something. He's doing it to show the other that he's a thinking person. Shakespeare manages to do this joke twice in this scene, because once again Bottom spies a problem in their play. A lion must appear on the stage and Bottom fears that, that will also frighten the ladies, therefore he suggests that they must tell the name of the actor who plays the lion, and that half of his face must be seen through the costume. He must say to the 'fair ladies' that he's not a lion, but a man - and his name is Snug the joiner. Shakespeare had managed to squeeze another verbal joke into Bottom's speech, by letting him identify a lion, as was it some sort of bird. He calls it a wildfowl, which is an old English term for a bird - This is also helping to show the lack of intelligence, Shakespeare has forced upon Bottom, when he was writing this play. Later on in the play, when the actors, who had all met in the woods, finally get to rehearsing, Shakespeare shows the stupidity of Bottom yet again, by putting another 'mistake' into Bottom's dialogue. ...read more.

(I bet Shakespeare took this into account when he was writing the play). This is clearly shown when they're speaking. Titania says something like: "Be kind and courteous to this gentleman..." and she nearly makes a whole poem out of her speech, with lots of long poetic words. Bottom will respond with something that he think himself is a hilarious joke; 'well-thought' and 'intellectual' - Not quite, but Bottom doesn't know, because he's still got his pompous attitude. Shakespeare had most certainly been thinking thoroughly about the names of the fairies, that Bottom was about to meet when Titania had convinced him to go with her, because he wanted to make Bottom come up with a joke for each and everyone of them - A fairly bad joke of course. Shakespeare knew that Bottom still had this pompous attitude going on, but he also knew that Bottom was a somewhat stupid character. It requires a certain level of intelligence to come up with good jokes, which will make listeners laugh or at least produce a bit of giggling. - But Bottom doesn't have that intelligence. The thing that makes Bottom funny is not his jokes, but his belief that his jokes are good and the amount of time he's spend making them up. ?? ?? ?? ?? Bjoern Nielsen, March 24, 2009 1,268 Words ...read more.