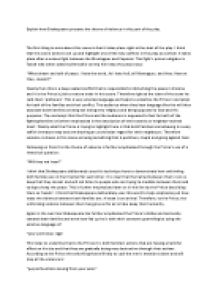 Transfer-Encoding: chunked ﻿Explain how Shakespeare presents the theme of violence in this part of the play. The first thing to note about this scene is that it takes place right at the start of the play. I think that this scene exists to set up and highlight one of the key conflicts in the play as a whole. It takes place after a serious fight between the Montagues and Capulets. This fight?s prime instigator is Tybalt who when asked by Benvollio to help him keep the peace says: ?What drawn and talk of peace. I hate the word, As I hate hell, all Montagues, and thee: Have at thee, coward!? Clearly then this is a deep seated conflict that is responsible for disturbing the peace in Verona and it is the Prince?s job to restore order in this scene. Therefore right at the start of the scene he calls them ?profaners?. ...read more.

It is clear that the hatred between them runs so deep that they cannot and will not listen to people who are trying to mediate between them and trying to keep the peace. This is further emphasised later on in the line by the Prince describing them as ?beasts?. I think that Shakespeare deliberately uses this word to help emphasise just how nasty the violence between both families are. A beast is an animal. Therefore, to the Prince, the unthinking violence between them has gone so far as to take away their humanity. Again in the next line Shakespeare has further emphasised the Prince?s dislike and animosity towards both families and even how fed up he is with their constant quarrelling by using the emotive language of: ?your pernicious rage? This helps to underline that to the Prince it is both families? actions that are having a harmful effect on his city and that they are gradually being very destructive through their actions. ...read more.

Surely then we as the audience will slightly sympathise with the Prince and his role to help keep the peace. This can be seen later on in the play when Tybalt gets into a fight with Mercutio. One of the key moments in the play is when Tybalt says: ?Mercutio thou consort'st with Romeo? This could be seen as being just friendly ?banter? however to both families it is seemingly jokey things people say to each other take on huge significance. For me then these ?airy words? have a huge impact because the strong sense of pride these characters have and how they are unable to let things slide. I think this helps to underline what I think is the big lesson that Shakespeare is trying to teach us about violence in the play and that is that is that violence is often seen by people who are not taking part or who are innocent bystanders as being pointless and damaging. ...read more.