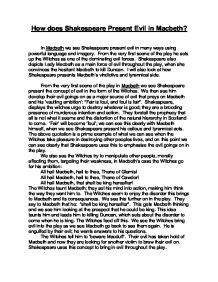 How does Shakespeare Present Evil in Macbeth?

How does Shakespeare Present Evil in Macbeth? In Macbeth we see Shakespeare present evil in many ways using powerful language and imagery. From the very first scene of the play he sets up the Witches as one of the dominating evil forces. Shakespeare also depicts Lady Macbeth as a main force of evil throughout the play, when she convinces the hesitant Macbeth to kill Duncan. I will also look at how Shakespeare presents Macbeth's vindictive and tyrannical side. From the very first scene of the play in Macbeth we see Shakespeare present the concept of evil in the form of the Witches. We then see him develop their evil goings on as a major source of evil that preys on Macbeth and his 'vaulting ambition': "Fair is foul, and foul is fair". Shakespeare, displays the witches urge to destroy whatever is good; they are a brooding presence of murderous intention and action. They foretell the prophecy that all is not what it seems and the distortion of the natural hierarchy in Scotland to come. 'Fair' will become 'foul'; we can see this clearly with Macbeth himself, when we see Shakespeare present his callous and tyrannical acts. ...read more.

Although the Murder of Duncan was not all of Macbeth's own doing the audience witness Macbeth's traitorous act of killing his own king. Shakespeare also adds evil to the play through the nightmares that Macbeth experiences with his 'heat oppressed brain'. Macbeth is also presented as evil through other characters perceptions: "What 'twere to kill a father. So should Fleance". This quotation by Lennox describes Macbeth's intention to kill Banquo and Fleance. We see Macbeth start to become evil in the form of bloodthirstiness in the play: "We have scorched the snake, not killed it". This gives the audience the impression that Macbeth's torment is not overcome by killing Duncan. It has only been temporarily put aside, he is not satisfied with just killing Duncan, he wants more. We see Macbeth live up to this evil satisfaction that he yearns in his murder of Banquo. We see Shakespeare present Macbeth as evil both directly and through other characters' perceptions. Shakespeare relays Macbeth's rampageous acts into seeing him as the callous tyrant he is. He is made to be a very strong evil force that is his undoing in the play. ...read more.

Shakespeare makes good use of insomnia to present the evil imagery in the play, the fact that Macbeth is unable to get any sleep, he is being tormented by the evil guilt of the sins he has committed: In the affliction of these terrible dreams That shake us nightly. Macbeth after the murder of Duncan is tormented by the nightmares that haunt him 'nightly'. We see Shakespeare emphasise this fact to show the evil goings on in the play to the audience. During Macbeth we see Shakespeare present evil using powerful language and imagery. We see him present characters such as the Witches and Lady Macbeth as dominating evil forces in the play. He uses their actions and thoughts to display to the audience the intensity of evil in each character; these in turn help to present evil in the play itself. The evil in Macbeth also presented in the play by strong imagery in the form of such things as blood, the weather, insomnia and the image of innocence of a naked - new born, to all lay the backdrop of evil in the play. The language and imagery combined by Shakespeare present the evil very clearly in Macbeth. TOM BEACH ...read more.