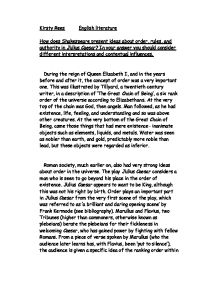 How does Shakespeare present ideas about order, rules, and authority in Julius Caesar? In your answer you should consider different interpretations and contextual influences.

Kirsty Rees English literature How does Shakespeare present ideas about order, rules, and authority in Julius Caesar? In your answer you should consider different interpretations and contextual influences. During the reign of Queen Elizabeth I, and in the years before and after it, the concept of order was a very important one. This was illustrated by Tillyard, a twentieth century writer, in a description of 'The Great Chain of Being', a six rank order of the universe according to Elizabethans. At the very top of the chain was God, then angels. Man followed, as he had existence, life, feeling, and understanding and so was above other creatures. At the very bottom of the Great Chain of Being, came those things that had mere existence- inanimate objects such as elements, liquids, and metals. Water was seen as nobler than earth, and gold, predictably more noble than lead, but these objects were regarded as inferior. Roman society, much earlier on, also had very strong ideas about order in the universe. The play Julius Caesar considers a man who is seen to go beyond his place in the order of existence. Julius Caesar appears to want to be King, although this was not his right by birth. Order plays an important part in Julius Caesar from the very first scene of the play, which was referred to as 'a brilliant and daring opening scene' by Frank Kermode (see bibliography). ...read more.

Again, honour is considered an important part of society, and forms the basis for many of the unwritten rules of Rome. It is this honour which leads Brutus to make the fatal mistake of allowing Marc Antony, as Caesar's closest friend, to speak second at his funeral, where his rhetoric sways the crowd to his side and eventually leads to the demise of the conspirators. The rules of honour also cause Brutus to forbear killing Marc Antony, another mistake, and one which Cassius, apparently unbound by these moral rules, berates him for. Due to these mistakes, Brutus becomes a 'victim of his own idealism', or so Professor Wells suggests in Julius Caesar- a critical guide. These rules of Roman society ultimately lead to the downfall of the two main characters- Marcus Brutus and Julius Caesar. Caesar is murdered by those closest to him as he broke the rules of a republic, and attempted to set himself up almost as a god. Ancestral rules bound both Elizabethans and Romans, but the bonds were far stronger in 44BC, when Julius Caesar was assassinated. When Cassius attempts to win Brutus around to his cause, he plays heavily on the duty of Brutus to follow his ancestor's footsteps in ridding the country of a would-be tyrant- Lucius Junius Brutus helped to drive out Tarquin the Proud in 509BC, and established the republic of Rome (this information comes from 'Shakespeare and the Romans', where it was adapted from Plutarch's 'Lives of the Greeks and Romans'. ...read more.

Marc Antony is one of only three characters who the audience perceives to have any real power over the fate of Rome. This appears to be mainly derived from his status of 'beloved of Caesar', but another source of this power is his skill in oratory, most ably demonstrated in AIII Sii, the famous 'friends, Romans, countrymen' speech. His power is consolidated in the post Julius Caesar world by his leading position in the new Triumvirate. Marc Antony is clearly the driving force in this group- at least in the beginning of the history, or in the play, as Plutarch informs us that soon after the triumvirate was formed, Octavius took the title of 'princeps' ('chief one'), calling into doubt Antony's true authority in Rome. In conclusion, Shakespeare uses the historical setting of Julius Caesar to display view of power and authority in a way which is still relevant to modern society, and all societies throughout history. Verse is used to signify authority, and many metaphors are also included, such as serpents: 'And therefore think him as a serpent's egg Which hatch'd, would, as his kind grow mischievous; And kill him in the shell.' Many are taken from the great chain of being prevalent in Elizabeth I's reign, most notably the description of a ladder in AII, si: 'Lowliness is young ambition's ladder' The interpretation of this play is tempered by Elizabethan ideals and beliefs of the time, but Roman honour is still a major part of the play. Word count- 2,376. ...read more.