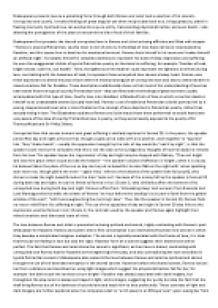 How does Shakespeare present love through Romeo and Juliet and a selection of his sonnets?

ï»¿Shakespeare presents love as a polarizing force through both Romeo and Juliet and a selection of his sonnets. Unrequited and courtly, it evokes feelings of great anguish yet when reciprocated and true, brings great joy, albeit in fleeting moments. Spiritual love can evolve into a pure entity, transcending physical attraction and even death – also allowing the protagonists of the play to transcend the bitter feud of their families. Shakespeare first presents the idea of unrequited love in Romeo and Juliet as being afflictive and filled with despair – Romeo is a typical Petrarchan, courtly lover in Act 1 Scene 1; his feelings of love have not been reciprocated by Rosaline, and this causes him to dwell on his emotional torment. Romeo shuts himself in his room and ‘makes himself an artificial night’, he isolates himself in complete darkness to represent his state of deep depression and suffering. He uses the exaggerated clichés of typical Petrarchan poetry to illustrate his suffering, for example “Feather of lead, bright smoke, cold fire, sick health”. Here, the lightness of the feather could represent the lightness one feels during love, contrasting with the heaviness of lead, to represent how unrequited love causes a heavy heart. Romeo uses these oxymorons to blend the joys of love with the emotional anguish of unrequited love and also to demonstrate his mixed emotions felt for Rosaline. These descriptions additionally show us that most of his understanding of love has been taken from the typical courtly/ Petrarchan love - they are filled with the feelings of great torment usually accompanied with this type of love. Courtly love is an idealized, infatuated form of love in which a courtier devotes himself to an unattainable woman (usually married). ...read more.

Some words of the sonnet are repeated, for example ?alter? and ?alteration, and ?remover? and ?remove?; these specific words again highlight that true love is spiritual as beauty may fade but this true love does not. However, these words also suggest that love is unchanging and eternal. The repetition emphasises that love has a sense of constancy (it is everlasting), which links to the end of Romeo and Juliet, where Romeo say?s ?Thus with a kiss I die? and Juliet mirrors with ?I will kiss thy lips; Haply, some poison yet doth hang on them?. Their love is perpetual - their love which birthed with a kiss now ends with one. Love outlasting death in both Sonnet 116 and Romeo and Juliet again presents love as being eternal and everlasting. For example, in Romeo and Juliet in Act 5 Scene 3, Romeo says ?Shall I believe that unsubstantial death is amorous?; he asks this bitterly, believing that Juliet is so beautiful that death has preserved her to be death's own lover, suggesting that Juliet ? along with her love for Romeo ? lives on after death. The audience is aware that Romeo is seeing the physical signs of Juliet's recovery from drug-induced sleep ? it is ironic that his attraction to her even in death encourages him to press onward with his own suicide, just as she is about to awaken. Throughout this scene, death becomes an act of love for Romeo, as he thinks that suicide will allow him to be reunited with Juliet. Shakespeare also demonstrates the true love having the ability to transcend death in Sonnet 116 through ?but bears it out to the edge of doom?, with ?doom? referring to doomsday. ...read more.

state?, however this line may also be referring to the speaker?s lips, which if were to be ?tickled? like those keys are, would gladly be transformed into wood and change places with the keys. The use of imagery to represent the male genitalia can further be linked back to Mercutio when he taunts Romeo about Rosaline in the quote ?Now will he sit under a medlar tree, and wish his mistress were that kind of fruit as maids call medlars?. A medlar is a small, round fruit with an apricot-like cleft that opens up when ripe and ready to eat; Mercutio equates this with the female genitalia, which remain closed until said lady is ready to ?open up?, further highlighting his crudeness and how he reduces love to sex. Mercutio says that Romeo wants to be around ?medlars? and that he wishes Rosaline was like a medlar (ripe and ready to ?open up?), demonstrating his ideas about love, in relation to them being purely sexual. Mercutio furthers the sexual imagery with "open et caetera" (in Shakespearian English this refers to the ?open? female genitalia), and ?poperin pear?, referring to the male genitalia, but also possibly sounding like ?pop her in?; Mercutio wants Romeo to engage in sexual relations with Rosaline. Structurally, this passage of speech highlights Romeo?s maturity and the difference in his perceptions of love, in comparison to Mercutio?s objectification of women. It features in Act 2 Scene 1, directly in between the scene in which Romeo and Juliet meet and fall in love and the famous balcony scene, Act 2 Scene 2, in which their love is further developed. Mercutio?s use of crude language again emphasizes how lust in Romeo and Juliet is presented as being a form of infatuation, in comparison to a true, spiritual love. ...read more.