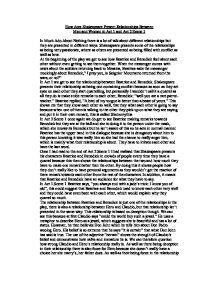 How does Shakespeare Present Relationships Between Men and Women in Act 1 and Act 2 Scene 1 In Much Ado About Nothing there is a lot of talk about different relationships but they are presented in different ways. Shakespeare presents some of the relationships as being very passionate, where as others are presented as being filled with conflict as well as love. At the beginning of the play we get to see how Beatrice and Benedick feel about each other without even getting to see them together. When the messenger comes with news about the soldiers returning back to Messina, Beatrice asks the messenger mockingly about Benedick," I pray you, is Seignior Mountanto returned from the wars, or no?" In Act 1 we get to see the relationship between Beatrice and Benedick. Shakespeare presents their relationship as being one containing conflict because as soon as they set eyes on each other they start quarrelling, but personally I wouldn't call it a quarrel as all they do is make snide remarks to each other, Benedick: "well you are a rare parrot-teacher." ...read more.

used to know each other very well and they could have even been with each other, which would explain why they quarrel so much. The relationship between Beatrice and Benedick is just one of the relationships in the play, there is also a relationship between Hero and Claudio, but that relationship isn't presented in the same way. This relationship is based on deception though. We can see this because at first Claudio says "could the world buy such a jewel." He uses a metaphor to describe Hero as a jewel, which suggests she is beautiful and has a lot of status. However, he then believes Don John when he tells him about Don Pedro wooing Hero. His belief is so extreme that he says "it is certain" that what Don John has said is true. The use of the adjective "certain" shows the strength of Claudio's belief and demonstrates how na�ve and immature he is. We can therefore question how strong Claudio and Hero's relationship really is. As well as there being deception in their relationship there is also force for Hero because she doesn't really have a choice her she marry's, her father does. ...read more.

The main person whom they help out is Claudio but that could be because he is the youngest and they are just looking out for him. In Act 1 Scene 1 once everyone had left the scene except for Benedick and Claudio, Claudio tells Benedick how he feels about Hero and to start off with Benedick mocks his love for her, "but I hope you have no intent to turn husband, have you?" this quote also shows me that Benedick doesn't like the thought of marriage. Even though he mocks Claudio, which he could only be doing because he doesn't want to show a soft side. He helps Claudio to win Hero by talking to Don Pedro (prince). When Don Pedro hears of this information he does the opposite of Benedick and is pleased instead of mocking Claudio for loving Hero. To show how pleased he is he offers to speak to Hero and to also speak to her father (Leonarto), "and I will break with her and with her father and thou shalt have her." which shows true friendship. ...read more.

This question asks the candidate how Shakespeare presents the realism of a relationship and the role on men and women in relationships. A common question on the GCSE syllabus, there must be a sensitive response that addresses the roles in ...

This question asks the candidate how Shakespeare presents the realism of a relationship and the role on men and women in relationships. A common question on the GCSE syllabus, there must be a sensitive response that addresses the roles in context of the time the play was written. The candidate makes a basic level of analysis whilst the focus on the question is somewhat blurred through a possible lack of comprehension. The play is understood, and remembered in sequence correctly, but the amount of insight given suggests a few more reads of the play would be well-recommended.

The Level of Analysis is typical of a GCSE student hoping to achieve a middle/high C grade. There is an analysis of the relationships in the play, with a well-formed view of how each characters act within their respective relationships (Claudio & Hero, Benedick & Beatrice, and also the friendship shared between Benedick, Don John and Claudio). However, this answer doesn't so much generalise the play's themes and the roles of men and women as much as it does talk about the characters exclusively. In order to achieve higher marks, the candidate needs to lift the themes and statements Shakespeare is trying to make off of the page and analyse how the context of the time is different to the roles of men and women today.

There is effective quoting in the essay, with a wide range of appropriate evidence taken from the texts in order to illustrate the candidates' points, each of them valid but restricted in that a lot of the time, it feels as though the candidate is re-telling the story. Candidates will win no marks for doing this unless there is a crystal clear effort to try and analyse the effect of what is quoted.

The Quality of Written Communication is average. A limited use of punctuation points limits this essay from reaching higher marks as there is less adeptness shown with language, though very few spelling or grammatical errors mean the intention of the essay of very clear and easily understandable.