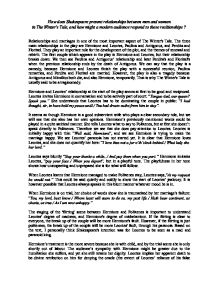 How does Shakespeare present relationships between men and women in The Winter's Tale, and how might a modern audience respond to these realtionships ?

How does Shakespeare present relationships between men and women in The Winter's Tale, and how might a modern audience respond to these realtionships ? Relationships and marriages in one of the most important aspect of The Winter's Tale. The three main relationships in the play are Hermione and Leontes, Paulina and Antigonus, and Perdita and Florizel. They play an important role for the development of the plot, and the themes of renewal and rebirth. The first couple which appears in the play is Hermione and Leontes, but their relationship breaks down. We then see Paulina and Antigonus' relationship and later Perdita's and Florizel's when the previous relationship ends by the death of Antigonus. We can say that the play is a camedy, because Hermione and Leontes finish the play with a successful reunion, Paulina remarries, and Perdita and Florizel are married. However, the play is also a tragedy because Antigonus and Mimilius both die, and also Hermione, temporarily. That is why The Winter's Tale is usually said to be a tragicomedy. Hermione and Leontes' relationship at the start of the play seems at first to be good and reciprocal. Leontes invites Hermione in conversation and to be actively part of court: "Tongue-tied, our queen? Speak you." She understands that Leontes has to be dominating the couple in public: "I had thought, sir, to have held my peace until / You had drawn oaths from him to stay". ...read more.

Paulina and Antigonus subvert the traditional Jacobean view of marriage which is that of a dominant husband. They provide a (comical) literary stereotype, still recognized today, of a nagging wife and a henpecked husband. They are very close and really do love each other. Antigonus allows Paulina her leeway, however, not because he is worn down, but more because he knows she knows what she is doing. There is still an element of allowance from Antigonus: 'When she will take the rein I let her run, / But she'll not stumble.' Paulina subverts another stereotype: a relationship where one figure is dominant. Leontes is scared of Paulina, almost like a husband fearful of a dominating wife: 'I charged thee that she should not come about me; / I knew she would.' Paulina has her own way because she has moral purpose. She does the right thing by her love of Hermione in defending her forcefully, which is why the audience (especially a modern one) sees Paulina favorably. Paulina tells Leontes he is wrong for his own good thereby putting herself in danger. It seems as though Antigonus and Paulina can't have any problems in their relationship, since both are tolerant. This is a contrast to Leontes and Hermione, as Leontes is happy with Hermione until she takes, as he sees it, too much liberty. ...read more.

There are no politics within their love. Their love complements the other relationships showing that love can continue and relationships can work despite difficulties. However, some fault is in their relationship. Florizel uses deception in the form of disguising himself and lies when they first arrive in Bohemia. Perdita (reluctantly) goes along with this. Perdita says that their affection is not overcome by their mind's shame of deception, perhaps implying that suffering strengthens us. In all three relationships, women suffer because of the negative qualities of men. Leontes is obviously the worst, but Antigonus thinks when he leaves the baby that Hermione might be actually guilty. Florizel uses deception to see Perdita in public but he does so because he wants to spend time with her and within her community, so as a modern audience we tend to forgive him. The women in the relationships are stronger in general. For a Jacobean audience, there would be key differences in how the relationships in the play are viewed to the reactions of a modern audience, but there would also be key similarities. As a modern audience, we know and understand previous views (and the context in which the play was first presented) and can hence incorporate these into our enjoyment of the play. The great messages and themes, therefore, are the same as they would have been 400 years ago. ...read more.