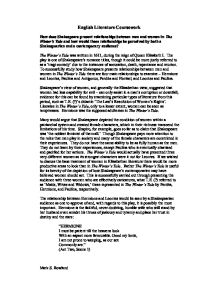 English Literature Coursework How does Shakespeare present relationships between men and women in The Winter's Tale and how would these relationships be perceived by both a Shakespearian and a contemporary audience? The Winter's Tale was written in 1611, during the reign of Queen Elizabeth I. The play is one of Shakespeare's romance titles, though it could be more justly referred to as a 'tragi-comedy' due to the instances of accusation, death, repentance and reunion. To successfully study how Shakespeare presents relationships between men and women in The Winter's Tale there are four main relationships to examine - Hermione and Leontes, Paulina and Antigonus, Perdita and Florizel, and Leontes and Paulina. Shakespeare's view of women, and generally the Elizabethan view, suggested that women had less capability for evil - can only assist in a man's corruption or downfall, evidence for this can be found by examining particular types of literature from this period, such as T.E. (?)'s didactic 'The Law's Resolution of Women's Rights'. Likewise in The Winter's Tale, only to a lesser extent, women can be seen as temptresses. Hermione was the supposed adulteress in The Winter's Tale. Many would argue that Shakespeare depicted the condition of women within a patriarchal system and created female characters, which in their richness transcend the limitations of his time. Shapiro, for example, goes so far as to claim that Shakespeare was 'the noblest feminist of them all.' Though Shakespeare pays more attention to the roles that men play in society and many of the female characters are constricted in their experiences. They do not have the same ability to be as fully human as the men. They do not learn by their experiences, except Paulina who is eventually chastised and pacified for her actions. The Winter's Tale would actually have presented three very different women as its strongest characters were it not for Leontes. If we wished to discuss the base treatment of women in Elizabethan literature there would be more productive areas to look than in The Winter's Tale. ...read more.

It is therefore worth noting that women's roles could often have been influenced by the way in which they are portrayed by literary authorities. In the Old Testament, in the Book of Genesis we can find the following example of how a woman brought shame unto mankind and caused the first humans to be extradited from paradise: "And the Lord God said unto Eve - I will greatly increase your pains in childbearing; with pain you will give birth to children. Your desire will be for your husband, and he will rule over you." This idea of women being ruled by men is reflected in The Winter's Tale through the battle of wills between Leontes and Paulina when Leontes is presented with his newborn child: "LEONTES What, canst not rule her? PAULINA From all dishonesty he can: in this, Unless he take the course that you have done, Commit me for committing honour, trust it, He shall not rule me." (Act Two, Scene Three) Shakespeare and his audience were clearly influenced by these ancient ideas. We can see this clearly from the way in which women are seemingly treated as subservient to men. In general, women are considered to be passive, while men are expected to be more active and aggressive. In The Winter's Tale most men at some point are aggressive, even the once bland and colourless Polixenes demonstrates his aggression when he confronts Florizel and Perdita. "POLIXENES Mark your divorce, young sir, Discovering himself Whom son I dare not call; thou art too base To be acknowledged: thou a sceptre's heir, That thus affect'st a sheep-hook! Thou old traitor, I am sorry that by hanging thee I can But shorten thy life one week. And thou, fresh piece Of excellent witchcraft, who of force must know The royal fool thou copest with,--" (Act Four, Scene Four) When we first see Paulina she is presented as somewhat aggressive in her manner, her tone and her language - what could be considered to be male characteristics - but later she is silenced or effectively 'feminised' by way of her arbitrary betrothal to Camillo. ...read more.

"LEONTES Is whispering nothing? Is leaning cheek to cheek? is meeting noses? Kissing with inside lip? stopping the career Of laughing with a sigh?--a note infallible Of breaking honesty--horsing foot on foot? Skulking in corners? wishing clocks more swift? Hours, minutes? noon, midnight? and all eyes Blind with the pin and web but theirs, theirs only, That would unseen be wicked? is this nothing? Why, then the world and all that's in't is nothing; The covering sky is nothing; Bohemia nothing; My wife is nothing; nor nothing have these nothings, If this be nothing." (Act One, Scene Two) This could be said to be indicative of his nihilism - the alliance of misogyny and nihilism is one of the greater Shakespearean insights into male nature. Throughout the works of Shakespeare there are countless insights into human nature to be discovered, it is likely that Shakespeare was more interested or simply more apt in providing insights into male nature. This can help to explain the structure of The Winter's Tale - although the play presents three women as very strong characters, we receive more insights into male nature than female nature, hence the lack of 'asides' during the play from the female characters. So because of Leontes' overwhelming nihilism, his character is to a degree ambivalent - that is we feel alternating attraction and repulsion. It could be argued that Shakespeare only goes so far with the gender roles - the women are eventually silenced or pacified - because the suspension of disbelief can only be maintained so far - the traditional view of women was confined within rigid boundaries. In The Winter's Tale all the women are badly treated - incidentally, at the hands of men. Our perspective of the actions of the men we believe to be harsh, though to Shakespeare's contemporaries they were likely to be justified - in fact chastisement would probably be justified to a more brutal extent. There is however little authentic evidence in the plays, that Shakespeare strove either to uphold or to subvert, however covertly, the established order. Word Count: 2650 Mark S. Rowland ...read more.