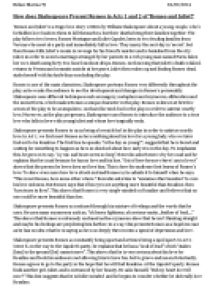 How does Shakespeare Present Romeo in Acts 1 and 2 of Romeo and Juliet?

﻿Rohan Sharma 9J 04/03/2014 How does Shakespeare Present Romeo in Acts 1 and 2 of ?Romeo and Juliet?? ?Romeo and Juliet? is a tragic love story written by William Shakespeare about a young couple, who?s forbidden love leads to them to kill themselves, but their deaths bring their families together. The play follows two lovers, Romeo Montague and Juliet Capulet, heirs to two feuding families from Verona who meet at a party and immediately fall in love. They marry the next day in ?secret?, but then Romeo kills Juliet's cousin in revenge for his friend?s murder and is banished from the city. Juliet, in order to avoid a marriage arranged by her parents to a rich young man named Paris, fakes her own death using forty-two hour knockout drops. Romeo, not knowing that Juliet's death is faked, returns to Verona and commits suicide at her grave. Juliet then wakes up and finding Romeo dead, stabs herself with his knife thus concluding the play. Romeo is one of the main characters. Shakespeare portrays Romeo very differently throughout the play, as he wants the audience to see the development and changes in Romeo's personality. ...read more.

He uses many oxymorons such as, ?oh heavy lightness, oh serious vanity...feather of lead.....? This shows that Romeo is extremely confused as the oxymoron show that he isn't thinking straight and maybe his feelings are perplexing him further. In a way, this presents Romeo as a hopeless case as he has no idea what he is saying as he is so deeply thrown into a spiral of depression and love. Shakespeare presents Romeo as constantly being upset and at times being a spoil sport. In Act 1 Scene 5, on the way to the Capulet?s party, he explains that he has a ?soul of lead? which ?stakes [him] to the ground [he] cannot move?. This shows that he is very serious about his love for Rosaline and feels his sadness is not allowing him to have fun, but to grieve and moan. Reluctantly, Romeo agrees to go to the party in the hope that he will find Rosaline. At the Capulet?s party, Romeo finds another girl, Juliet, and is entranced by her beauty. He asks himself, ?Did my heart love till now?? This line suggests that he is fickle-minded and he begins to wonder whether he did really love Rosaline. ...read more.

An example would be ?my lips, two blushing pilgrims, ready stand. On the other hand, this can also suggest that their love is out of control and that they don?t just love each other but they in fact worship each other. This use of imagery at the time was very controversial because it was seen as dangerous and sinful to worship anyone except God. Romeo finally is presented as an adventurous and daring character by Shakespeare. He attended the Capulet fancy dress ball, despite being a Montague thus creating suspense. The tension also increases when Romeo says that he ?had a dream? that made him afraid to go to the party. Romeo throughout Act 1 and Act 2 creates tension for the audience and goes out late at night to see Juliet on the balcony in Act 2 Scene 2, unfazed, undeterred and never losing his curiosity. To conclude, Shakespeare presents Romeo in a unique way to the rest of the characters. He gives Romeo different personalities so at times; Romeo is romantic, caring and passionate whereas at other times, he can be funny and intelligent as well as having a dark and violent side. Shakespeare does this using a range on techniques and devices and though impulsive and immature, his idealism and passion make him an extremely likable character. ...read more.