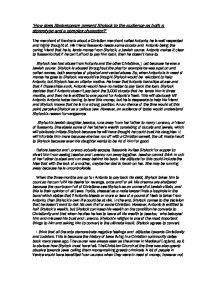 'How does Shakespeare present Shylock to the audience as both a stereotype and a complex character?'

'How does Shakespeare present Shylock to the audience as both a stereotype and a complex character?' The merchant of Venice is about a Christian merchant called Antonio; he is well respected and highly thought of. His friend Bassanio needs some ducats and Antonio being the caring friend that he is, lends money from Shylock, a Jewish usurer. Antonio makes it clear to Bassanio that if he can't afford to pay him back, then he doesn't have to. Shylock has had abuse from Antonio and the other Christians, just because he was a Jewish usurer. Shylock is abused throughout the play for example he was spat on and called names, both examples of physical and verbal abuse. So, when Antonio is in need of money he goes to Shylock, we would've thought Shylock would be reluctant to help Antonio, but Shylock has an ulterior motive. He knew that Antonio had ships at sea and that if those ships sunk, Antonio would have no matter to pay back the loan. Shylock decides that if Antonio doesn't pay back the 3,000 ducats that he lends him in three months, and then he is entitled to one pound for Antonio's flesh. This will obviously kill Antonio. Antonio hates having to lend this money, but he is desperate to help his friend and Shylock knows that he is in a strong position. An audience of the time would at this point perceive Shylock as a callous Jew. However, an audience of today would understand Shylock's reason for vengeance. Shylock's Jewish daughter Jessica, runs away from her father to marry Lorenzo, a friend of Bassanio. She steals some of her father's wealth consisting of ducats and jewels, which will obviously irritate Shylock because he will have thought he could trust his daughter. It will infuriate him more because she has run off with a Christian aswell, the ultimate insult to Shylock because even his daughter wants to be rid of him for good. ...read more.

So, would Shylock prefer the money back than his daughter? From what the audience at this point have seen so far, it seems quite apparent that Shylock values his money over his daughter and likes to make some fuss about his hardship. Still, is he always like this, would he tell anyone about his suffering? And does he always make such a huge fuss? Maybe he is so upset, he cannot help it but from this scene alone it isn't clear yet, what he would do. "A sealed bag, two sealed bags of ducats, of double ducats" This quote highlights the point that he would much prefer the money to his daughters presence. When Shylock speaks to Tubal, a fellow Jew, Shylock confides in, what we think, his only friend. "Hast thou found my daughter?" this suggests he is concerned about his daughter, although he is probably just anxious to know where she is and if she is dead or alive. In addition to asking if his daughter has been found Shylock is says he would "Rather dead at my feet, and the jewels in her ear". This quote shows that despite being devastated because of losing money, he would prefer to know where his daughter was and that the stolen jewels hadn't been traded or spent. It also shows that Shylock wouldn't want the money back as it is tainted and 'dirty' money. As soon as Shylock hears that another of Antonio's ships will fail to return, he is "Glad of it" and his mood becomes happier because he knows that Antonio, that his revenge is soon to become a reality, or so he thinks. We notice that Shylock's hatred of Christians in general but particularly Antonio increases because Jessica wouldn't have been able to steal anything if Shylock had been around and if Bassanio hadn't invited Shylock for supper, they wouldn't have got away with any of Shylock's money. ...read more.

Shylock is told that he must convert to Christianity and give half his wealth to Antonio, and give the other half to Jessica when he passes away. Shakespeare doesn't give Shylock anything to say, therefore we don't know exactly, how he felt, but we can certainly assume he was devastated and that the tables have turned, yet again and the Christians now have the upper hand. This is Shylock's last scene in the play, and he is humiliated again. This shows that since his first scene he was ridiculed and humiliated by the Christians and he is right through to his exit. I believe that Shylock shouldn't have been treated the way he was because of the Christians holding a grudge between the two religions. Shylock was driven to revenge by the constant abuse and cruelty he suffered. Shylock's religion is the only justification Antonio has for any of the abuse he and his friends give Shylock. Shylock really wasn't the devil-like creature but was a victim of the prejudicial Christian society. The only thing he gained from his bond was a lot less than he had bargained for. We don't see Shylock trying to ignore the Christians; one example of this is that he agrees to go to Bassanio's for supper. In conclusion, I believe that Shakespeare wanted the audience of the time to realise that two different religions, could still unite and live in a society without religious inequality. He couldn't really voice his opinions too much through Shylock, as Shakespeare had to write what Christians would pay to see. I think that Shakespeare portrays his views in a very effective way, but how she shows the persecution of Shylock. Also, Shakespeare uses, how Shylock kept his anger inside, and gradually it built up, and inevitably he regretted seeking revenge on Antonio because he ended up, a lot worse off than he began. Shakespeare uses language to portray Shylock as a complex character and a stereotype and this is reflected upon by the audiences' opinion and views. ...read more.