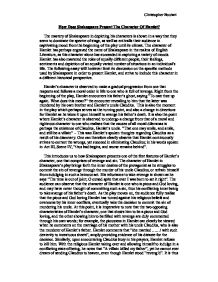 How does Shakespeare present the character of Hamlet?

How Does Shakespeare Present The Character Of Hamlet? The mastery of Shakespeare in depicting his characters is shown in a way that they seem to dominate the spectre of stage, as well as enthralls their audience in captivating mood from the beginning of the play until its climax. The character of Hamlet has perhaps engraved the name of Shakespeare in the realms of English Literature, as this character alone has succeeded in capturing a variety of moods. Hamlet has also mastered the roles of equally different people, their feelings, sentiments and depiction of an equally varied number of situations in an individual's life. The following essay will however limit its discussion on the specific methods used by Shakespeare in order to present Hamlet, and strive to include this character in a different historical perspective. Hamlet's character is observed to make a gradual progression from one that respects and follows a moral order in life to one who is full of revenge. Right from the beginning of the play, Hamlet encounters his father's ghost, saying "To cast thee up again. What does this mean?" the encounter revealing to him that the latter was murdered by his own brother and Hamlet's uncle Claudius. ...read more.

Any insane individual would have committed the murder, particularly when his adversary was busy in a task, even if it was praying. Another strong aspect the sanity in Hamlet's character is the long duration taken for taking a final decision. The famous quote "To be or not to be" implies that Hamlet was truly in a state of indecisiveness, as he could take a decision whether to commit the sin or not. On one side his conscience forces him to take the revenge of his father, while at the same time Hamlet also thinks of committing suicide as he cannot live a life in such a state of turmoil. At the same time Hamlet also has thoughts that he would rather die than remain unavenged. Insanity would have any individual to act in impulse, and not wait as was done by Hamlet. In the modernised film of 'Hamlet' by Ethan Hawke, Hamlet is shown to be a mad person more than in any other film. This is because it frequently shows him isolated and talking to himself in an arguably mental tone. In addition to the two contrasting features of Hamlet, Shakespeare chooses to present the protagonist as an antiheroic figure. ...read more.

Hamlet approaches Ophelia and talks to her. He famously tells her "get thee to a nunnery." Hamlet becomes angry, realizes he's gone too far, and says "I say there will be no more marriage", and exits. Ophelia is left bewildered, scared, and heartbroken, sure that Hamlet is crazy. After Hamlet storms out, Ophelia makes her "O, what a noble mind is here o'erthrown" soliloquy. Other characters in Hamlet such as Laertes and his father Polonius convey hatred towards Hamlet, before and after Polonius's death. Laertes advises Ophelia against Hamlet's romantic pursuit of her, and Polonius forbids her to "give words" with him. After Polonius's death, Laertes despises Hamlet further. He says "I dare damnation. To this point I stand, that both the world, I give to negligence, Let come what comes; only I'll be reveng'd, most thoroughly for my father." In conclusion, Shakespeare presents the character of Hamlet in numerous ways. In one perspective, his role progresses from one who follows a moral order in life to one who is mad, and full of revenge and sin. In contrast he presents his character as sane as well. Shakespeare also conveys distinctive elements in Hamlet such as his antiheroism and conscientiousness. The fact that Hamlet is presented in several alternative forms is sheer evidence of how Hamlet is a very unique character and why the play was very successful. ?? ?? ?? ?? Christopher Boutari ...read more.

This is a very good essay and does a good job of exploring the character of Hamlet. The presentation of Hamlet throughout such a long play is a very broad task and at times the essay becomes a bit list like because so many points are trying to be explored; perhaps considering presentation of the character in three key scenes would enable for a more focused piece.