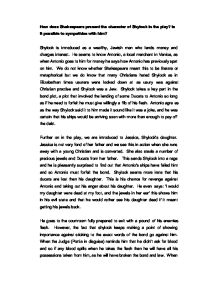 How does Shakespeare present the character of Shylock in the play? Is it possible to sympathise with him?

How does Shakespeare present the character of Shylock in the play? Is it possible to sympathise with him? Shylock is introduced as a wealthy, Jewish man who lends money and charges interest. He seems to know Antonio, a local merchant in Venice, as when Antonio goes to him for money he says how Antonio has previously spat on him. We do not know whether Shakespeare meant this to be literate or metaphorical but we do know that many Christians hated Shylock as in Elizabethan times usurers were looked down at as usury was against Christian practise and Shylock was a Jew. Shylock takes a key part in the bond plot, a plot that involved the lending of some Ducats to Antonio so long as if he need to forfeit he must give willingly a 1lb of his flesh. Antonio agrees as the way Shylock said it to him made it sound like it was a joke, and he was certain that his ships would be arriving soon with more than enough to pay off the debt. Further on in the play, we are introduced to Jessica, Shylock's daughter. Jessica is not very fond of her father and we see this in action when she runs away with a young Christian and is converted. ...read more.

The way people view the character of Shylock has changed through the centuries, in the seventeenth century he was seen as a savage villain who is contrasted with the other characters' comical and romantic styles. However in the nineteenth century, people focused on the sufferings of Shylock and why he behaves like he does. The reason for the change in opinion could be explained by the way anti-Semitism is seen. When the play was written, it was common to hear anti-Semitic views by the Christians, they often made jokes at those less fortunate and some could say that Shylocks purpose was for some to laugh at a Jewish person's expense. For example in act 3 scene 1 Salarino and Solanio talk about Shylock's misfortunes rather sarcastically. One opinion about the way that Shakespeare presents Shylock in the play is that he is shows him to be a Jewish man who is misunderstood, mistreated and unfairly accused. Shylock can be played as an attractive, sympathetic figure. The ending of the play helps this view very strongly as everything is taken from including his possessions and even his religion. It seems at the end that Shylock has nothing left to live for, even his daughter has played traitor to him and run off with the Christians. ...read more.

I have already mentioned how the Elizabethans saw Jews to be evil and that when they see him suffering this may have shown some crude and grotesque humour. The way Shylock is mocked in the finial scene is seen to be fairly humorous for Elizabethan standards. In the film version we watched early on in the year Al Pacino played Shylock. The way he played the part, in my opinion, made the audience sympathise with him more as his facial expressions showed that he felt just for all the wrong things he did. In the film, it showed the courtroom scene to be played in a sympathetic way. Al Pacino shows great empathy with his character when Shylock has to decide whether to take the flesh even though he will be punished. Shylocks eventual outcome is rather malicious and the way they treat him considering they should be happy that their friend is not going to be killed is rather heartless. They probably think that their actions are justified as Shylock did intend to kill Antonio, yet if they knew how much it hurts to suffer they would have let him go with no further punishment. Also if they cared about their religion so much they would understand how it would feel if they were made to change their religion. ?? ?? ?? ?? ...read more.

The candidate uses the introduction to discuss the scene in which Antonio talks to Shylock about loaning some money. The introductory paragraph of an essay should be used to introduce what you plan to discuss, in this case it should ...

The candidate uses the introduction to discuss the scene in which Antonio talks to Shylock about loaning some money. The introductory paragraph of an essay should be used to introduce what you plan to discuss, in this case it should introduce Shylock as character i.e his appearance and personality. It is not necessary to talk about specific scenes of the play in your very first paragraph. The candidateâ€™s response to the question is at times a little vague, they sometimes discuss parts of the play without saying how this gives an insight to Shylockâ€™s personality. In addition the candidate does not clearly discuss whether or not the audience sympathises with Shylock. It is essential to make sure that whatever you're discussing, you always come back to the main question.

For the most part the candidate simply retells parts of the play, without giving any analysis or mentioning any further points. This is something you need to avoid as much as possible. It is often important to discuss certain scenes in a play, but you need to find a way to do this without simply retelling the story. You should discuss the characters thoughts and feelings, even if itÃ¢â‚¬â„¢s just a guess at how you think they might feel. In addition the candidate uses very few quotations from the play, it is important to pick key quotations that back up your ideas and opinions. However the candidate does discuss the differences in the way Shylock is portrayed in the film version; this insight adds an interesting note to the essay. I would also like to add that the candidate could have gained a higher grade by undergoing independent research, this shows your interest in the play and also makes the essay more enjoyable for the reader. Finally there is no real conclusion to this essay, though the ending paragraph does mention an important point about the characters views of religion. A conclusion should answer the initial question, summarise your key points and ideas and include your personal opinions (in this case your opinions of the character Shylock). This is important as it brings the essay to a close and gives you a chance to leave the reader with a good impression.

The candidate fails to mention Shakespeare's use of language, and how he deliberately writes in a way that catches the audience attention. It is necessary to discuss the use of linguistic techniques, such as metaphors and similes, in order to achieve a higher grade at this level. On a positive note the essay is fluent and easy to read and there is no real issue with spelling, grammar or punctuation. Overall I would say that this is a pretty average example of the standard of work I would expect for this level of qualification.