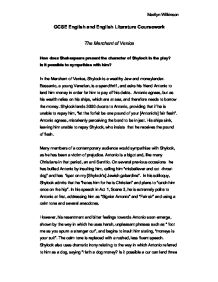 How does Shakespeare present the character of Shylock in the play?

GCSE English and English Literature Coursework The Merchant of Venice How does Shakespeare present the character of Shylock in the play? Is it possible to sympathise with him? In the Merchant of Venice, Shylock is a wealthy Jew and moneylender. Bassanio, a young Venetian, is a spendthrift, and asks his friend Antonio to lend him money in order for him to pay off his debts. Antonio agrees, but as his wealth relies on his ships, which are at sea, and therefore needs to borrow the money. Shylock lends 3000 ducats to Antonio, providing that if he is unable to repay him, "let the forfeit be one pound of your [Antonio's] fair flesh". Antonio agrees, mistakenly perceiving the bond to be in jest. His ships sink, leaving him unable to repay Shylock, who insists that he receives the pound of flesh. Many members of a contemporary audience would sympathise with Shylock, as he has been a victim of prejudice. Antonio is a bigot and, like many Christians in that period, an anti Semitic. ...read more.

However, a contemporary audience would have felt less compassion towards Shylock as they too lived in an anti-Semitic society. Jews were discriminated against and treated badly. Christians disapproved of usurers, who loaned money then charged interest. It could be argued that Christians were jealous of Jews, and as a possible result of this Jews were relegated to ghettos. There are elements of humanity in the character, mainly in his "Hath not a Jew eyes" soliloquy, in which he pleads his right to equality and to revenge himself on the Christians who wrong him. A modern audience is more likely to sympathise with Shylock, as discrimination and racism, though it still exists, is deemed politically incorrect and consequently frowned upon. However, Shylock himself states, "I hate him for he is Christian", which in addition to insulting many members of the audience, is another example of racism. The sympathy would wane with both audiences when Shylock proposes the forfeit of a pound of flesh, as it is nauseating and completely inappropriate, although at this point the audience may still believe he is jesting as Shylock refers to the agreement as a "merry bond". ...read more.

The sympathy a modern audience may have originally would wane considerably at this point, as Shylock clearly intends to murder Antonio. For a moment it appear that he may be successful, yet eventually Portia realises that the bond is restricted to the removal of only flesh, not blood, and would therefore be impossible. Shylock then compromises and asks for money instead. His suggestion is rejected, though, and is forced to give up half of his wealth and donate his property to Jessica and Lorenzo. Worst of all, he is given no option but to convert to Christianity. As he leaves the court, after his eloquence and anecdotes, he concludes with a short speech mainly consisting of monosyllables, muttering, " I am not well; send the deed after me and I will sign it". To conclude, Shakespeare may have been creating a different kind of villain in Shylock. Shylock is not a stereotypical villain, but neither is there a stereotypical hero. He may have intended to portray the way in which the treatment of others can affect their personality. This is shown by the way Shylock's personally appears to be tainted by the discrimination shown towards him, particularly by Antonio. Marilyn Wilkinson ...read more.