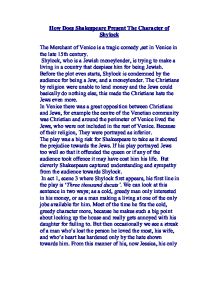 How Does Shakespeare Present The Character of Shylock

How Does Shakespeare Present The Character of Shylock The Merchant of Venice is a tragic comedy ,set in Venice in the late 15th century. Shylock, who is a Jewish moneylender, is trying to make a living in a country that despises him for being Jewish. Before the plot even starts, Shylock is condemned by the audience for being a Jew, and a moneylender. The Christians by religion were unable to lend money and the Jews could basically do nothing else, this made the Christians hate the Jews even more. In Venice there was a great opposition between Christians and Jews, for example the centre of the Venetian community was Christian and around the perimeter of Venice lived the Jews, who were not included in the rest of Venice. Because of their religion, They were portrayed as inferior. The play was a big risk for Shakespeare to take as it showed the prejudice towards the Jews. If his play portrayed Jews too well so that it offended the queen or if any of the audience took offence it may have cost him his life. ...read more.

O my ducats! O my daughter! Fled with a Christian! Only Christian ducats!'. This speech of his could have earned a lot of sympathy from the audience if he didn't mention the ducats. He had compared his own daughter to money, demonstrating that he thought of his money as important, if not more important than his daughter. Which once again outlines this stereotypical, greedy 'Jewish' figure. But the most distinguished sympathy cry in the play is Shylock's famous plea for equality in Act three, Scene Five, which victimises him and lets us see him in a whole new light; 'What's his reason? I am a Jew. Hath not a Jew eyes? Hath not a Jew hands organs, dimensions, senses, affections, passions fed with the same food, hurt with the same weapons'. This equality speech is meant to soften the audience towards Shylock, even if it is only momentarily, since he proceeds to carry out his bond in which he's able to legally commit murder to Antonio. The court scene is Shylock's only chance for some justice, if only as a way of revenge for how he has been treated all his life. ...read more.

Shylock has his possessions taken away because of the attempted murder of Antonio, who made two conditions of his life: he must, firstly, become a Christian and, secondly, leave all of his possessions to Jessica and Lorenzo in his will. So, besides him being converted to a Christian and humiliated in court, loosing his possessions and daughter, his friend Tubal left him. Shylock is iscolated not only from Christans but also from Jews. In a way it is quite ironic how the one thing that ruined him, is the one thing that he is left with; Christianity. I think Shylock had been sent right to the point of insanity, he had been victimised all his life. And maybe he only acts in such a horrible manner in a reflex to how he had been treated. So, if racism hadn't victimised him then maybe his temperament would be gentler. I think that Shakespeare presented Shylock in many different aspects and it will depend on the eyes of the individual to which side is seen more clearly. I think Shylock is presented as a comical character to some and both victimised and a villian. Ariana Alexander-Sefre 11y1 GCSE English ...read more.