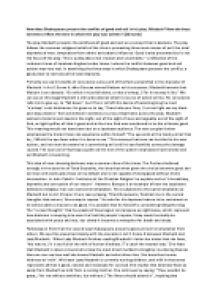 How does Shakespeare present the conflict of good and evil in his play, Macbeth? How do these extremes reflect the time in which the play was written?

Transfer-Encoding: chunked ﻿How does Shakespeare present the conflict of good and evil in his play, Macbeth? How do these extremes reflect the time in which the play was written? (20 marks) The play Macbeth presents the antithesis of good and evil as a concept that is absolute. The play follows the common religious beliefs of the time in presenting three main causes of evil: the total depravity of man, temptation from others and satanic influence. Good is also presented but is not the focus of the play. This is a play about evil, treason and uncertainty ? a reflection of the turbulent times of Jacobean England under James I where the conflict between good and evil actions was very real. In examining the three ways in which Shakespeare presents the conflict, a good place to start would be total depravity. Primarily we see this battle of conscience versus will of the flesh personified in the character of Macbeth. In Act 1 Scene 4, after Duncan names Malcom as his successor, Macbeth laments that Malcom is an obstacle: ?On which I must fall down, or else o?erleap, / For in my way it lies.? We can see at this stage Macbeth is still undecided at what his course of action will be. His conscience tells him to give up, to ?fall down?, but if he is to fulfil his desire of becoming king he must ?o?erleap? such hindrances. ...read more.

This is conveyed to us when she promises to, ?chastise with the valour of my tongue.? The use of ?chastise? creates a violent image, as if she intends to give him the verbal equivalent to a beating. She wishes to pass her boldness on to Macbeth, in variance to the typical submissive attitude that was expected of wives in that era. She further emphasises her dark and rebellious nature when the messenger informs her that Duncan is to stay in her castle that night. With an element of twisted glee she interprets the hoarse cry of the raven to foreshadow, ?the fatal entrance of Duncan / Under my battlements.? She refers to the castle as if it belonged solely to her, and as if the murder of Duncan will be of her doing with minimal help from Macbeth. She is presented to the audience as just as ambitious as Macbeth, if not more. The raven itself is a bird typically associated with darkness, death and evil. It is even more ominous that it has croaked itself hoarse, conveying that evil is already corrupting Scotland before that cataclysmic deed is even committed. Lady Macbeth is adamant that she wants any form of femininity, no matter how mild, to be removed from her so that she can carry out her task efficiently. She expresses a desire to be ?unsexed?. ...read more.

The audience is given a sense of how heinous a deed this is when he continues; ?Most sacrilegious murder hath broken ope / The Lord?s anointed temple.? In the conflict between good and evil in Macbeth Macduff is presented as being a religious man, like Banquo. He uses another direct Biblical reference, this time citing verses about kingship. Old Testament kings were directly anointed by God, and it is said the body of a holy man is the temple of God?s spirit. Violent imagery is used when he talks about the temple being, ?broken ope?, implying that the spirit was forcibly and criminally removed from its righteous place. Following on from this, the Divine Right of Kings was a major factor in James I?s court. This was a Puritan doctrine that said each king was predestined to take the throne by God and treason against the king was also a blasphemous crime against God. In the epistle dedicatory of the King James/Authorised Bible it reads, ?Great and manifold were the blessings, most dread Sovereign, which Almighty God, the Father of all mercies, bestowed upon us the people of England, when first he sent Your Majesty?s Royal Person to rule and reign over us.? The doctrine?s purpose was routed in kings like James wishing to reinforce their position rather than Biblical fidelity. James was short and did not have the physical appearance of a typical king, and he had recently survived an assassination attempt at the hands of a Catholic group. He had many reason to fear for his right to the throne. ...read more.