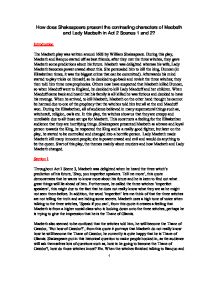 How does Shakespeare present the contrasting characters of Macbeth and Lady Macbeth in Act 2 Scenes 1 and 2? Introduction The Macbeth play was written around 1603 by William Shakespeare. During this play, Macbeth and Banquo started off as best friends, after they met the three witches, they gave Macbeth some predictions about his future. Macbeth was delighted whereas his wife, Lady Macbeth becomes power crazed about this. She persuaded him to kill the king, Duncan (in Elizabethan times, it was the biggest crime that can be committed). Afterwards his mind started to play tricks on himself, so he decided to go back and revisit the three witches; they then told him three new prophecies. Others now have suspected that Macbeth killed Duncan, so when Macduff went to England, he decided to kill Lady Macduff and her children. When Macduff came back and heard that his family is all killed he was furious and decided to have his revenge. When he arrived, to kill Macbeth, Macbeth on the other hand thought he cannot be harmed due to one of the prophecy that the witches told him but all at the end Macduff won. During the Elizabethan, all of audience believed in many supernatural things such as, witchcraft, religion, owls etc. In this play, the witches show us that they are creepy and unreliable due to all those set ups for Macbeth. This constructs a feeling for the Elizabethan audience that they are horrifying things. Shakespeare presented Macbeth as a brave and loyal person towards the King, he respected the King and is a really good fighter, but later on the play, he started to be controlled and changed into a horrific person. Lady Macbeth made Macbeth kill many innocent people; she is power crazed and evil and would do anything to be the queen. Start of this play, the themes mainly about murders and how Macbeth and Lady Macbeth changed. ...read more.

Shakespeare uses this to show us that Macbeth's mind is playing tricks on him, is encouraging him to commit the crime and that he has some evilness in him. The audience would think that he is now crazy and seeing things which is just his mind persuading him to do it. Macbeth is now asking lots of question, 'Proceeding from the heat-oppress�d brain?' this quote portrays that he does not know why he can see the dagger, he is wondering that it might be his brain is over-heated, this makes the audience wonder more about how he can see it, they might even ask themselves question. Shakespeare wants the audience to have a picture in their minds of Macbeth following the dagger and to give us a vision that he can see it but cannot touch it. A quote could be 'And such an instrument I was to use', this quote represents that Macbeth got the dagger from his pocket and he is about to use it. Shakespeare made the soliloquy long is to show us how nervous he is, he might want us to think about Lady Macbeth and how evil she is, by persuading Macbeth to kill Duncan. Macbeth shows us that he is really mixed up, he cannot sort out the right from the wrong, and just simply following his wife's orders. Shakespeare uses a lot of imageries in this part of the soliloquy to increase the tension, 'And on thy blade and dudgeon gouts of blood,' this quote indicates that the dagger starts to get dripping blood yet he has not committed a crime. Shakespeare uses foreshadowing to build up the tension for when Macbeth kills the king, maybe he wants to create a feeling like as if we were there next to Macbeth, this hooks in the audiences' attention. Macbeth been controlled by the witches, 'Pale Hecate's off'rings and withered murder', this quote demonstrates that the goddess of the witches is like controlling him to kill the king, he does not want to do it but the witches are making him do it. ...read more.

Now he fully understands what he has done and knows that what a monster he has become. This makes the audience notice that he does not want to know that monster (himself), he knows that he cannot help to do anything better. At the very last, we hear the knocking again, Macbeth wishes none of it had ever happened, as he calls out 'Wake Duncan with thy knocking: I would thou couldst', this quote indicates that the knocking showed up a few times which Shakespeare might want us to think about why there is knocking, to ask ourselves questions. Conclusion Shakespeare maintains fear and horror throughout the play by reference to the supernatural, such as animal(owl, cricket), this help the play as the Elizabethan audiences does not like these kinds of creatures as they find them evil. He also uses lots imageries such as metaphors, similes etc. to make the audience entertained and hook into the play and also it helps to build up the tension. Shakespeare has also included soliloquy, hyperbole, asides and the use of the tone of voice, these make the play more realistic and them creepy but enjoyable to watch. Macbeth is a person who is scared at fear, at the beginning of the play, Macbeth is described as a brave, loyal man who is kind, but his wife manipulates him by accusing him of being a coward, and throughout the play he denies his own fears. I think that Macbeth is a fine war lord who is loyal to the king, but he shows some of his cruel side, mostly during the middle part of the play. At first, it appears that Lady Macbeth is the dominant partner that is evil and cruel, but after the murder of King Duncan she loses her grip on her husband and becomes weird as she could not even control herself. She is a two-faced woman who pretends that she is kind and lovely to people, especially the king. ?? ?? ?? ?? 1 ...read more.